Things About Being Real

The other day, my sister and I were having a conversation about "being real" as opposed to being pretentious or fake or trying to convince anybody on the outside that we are something we really are not. I feel like I have pretty well mastered the art of letting everybody who knows me, plus a few thousand who don't, how "real" I am. To a fault. I am pretty darn good at highlighting my failures, my trials and errors and mess-ups and mistakes and oopses, wannabes and nice-tries. In fact, I am so real, that I think certain people have wisely calculated a wide berth of avoidance to reduce the risk of my train-wreck life, with it's messy divorces, dog hair, toilet floods and worms, getting in their perfectly crafted martini. And that's ok, because I'll take dog hair over perfectly crafted martinis any day. I guess. That's not really true. But I will settle for a warm beer.

The funny thing about "being real" or living in "reality", is that a lot of times it's straight up unrealistic.

Like for instance, me raising four daughters to various stages of older childhood/adulthood and killing none of them. It's very really happening, but it's very nearly impossible.

Like passing the work capacity test for the forest service. Realistically, I could Just Say No. I Can't. The disc between my L5/S1 vertebrae has degenerated completely, similar to the moral standards of my late 20s. I am old. I have a torn shoulder, a sprained ankle and All Of The Things hurt. But I will do it, because it's worth it to me. And it's not pretty. I don't look like Mary Lou Retton dismounting the balance beam with rosy cheeks in a patriotic leotard. I look like a dying vagrant with COPD that someone just tried to beat to death after falling off of a train. But I will still do it. And that is both real and unrealistic.

In many ways, we're all pretending a little bit to be something we're not. I am pretending to be a young, athletically viable firefighter. My friend is pretending to be Just Fine as she sits in the hospital with a very sick husband and other family members in crisis. My other friend is pretending to be a softball coach. My cousin is pretending to know how to be the Best Stepmom Ever to some hurt kids... and she's killing it. One of my friends is pretending to enjoy police academy, surrounded by guys half his age, guys that don't have decimated hips and too many decades of abuse on their bodies like he does, and he is KICKING ASS. Because maybe it's unrealistic, but it's really happening. And they'll get it done. Those girls will get the crap coached out of them, and that husband will be Just Fined all the way home to his La-Z-Boy where he belongs. Those kids will be whole and happy. And that guy will be the best cop that ever copped. I pretend to be a teacher, and I am about to pretend to be a full time teacher for a full semester... it's ridiculously unrealistic, something that regular and accountable for me, but you watch, I'll really do it. For reals.

We go through life being Really Unrealistic. Doing things that we can't possibly. Like childbirth. Or homeschooling (NOT ME!). Or paying the bills. Pretenders are heroes, sometimes, and I think that all the time, heroes are pretenders. Pretending to be brave, pretending to know Exactly What To Do, pretending to like it. Sometimes, being who we really aren't is the thing that saves the day. Like coaching a softball team, or being the "strong one" in the family, or maybe even just being nice to someone when nice is certainly NOT what you really feel, but very certainly what somebody else needed you to be.

So the next time you get overwhelmed with the The Thing You Cannot Do, with all of the dog hair that won't stay vacuumed, or the kids that won't get potty trained, or the really, really REALLY hard mile and a half on that one day when a mile and a half is just too much - just know that I am here being unrealistic with you. We are doing this unrealistic life together - really doing it. Covered in dog hair and swilling our warm beer, but we're doing it. We're covering the miles and growing the kids and loving the people. Even when loving seems like the most unrealistic of all, we do it. We make the choices and take the steps to get life done, with all of the unreality included.

I am ok with being a messy. With being imperfect and slightly embarrassing to my people. It's ok, because I know that I have kicked reality right where it counts. I don't need to be real, and I don't need to be fake, I just need to be. Right Here, doing the Right Thing, Right Now that needs to be done, even if I can't.

My next plan for unreality is to get Eric Church to marry me, or something along those lines. For practice at accomplishing the impossible though, Ima salvage some freezer burned hamburger in homemade chili from scratch that I am trying unrealistically to remember from watching my best friend make it a few months ago. So far, so good. There I go, making miracles all over the place. 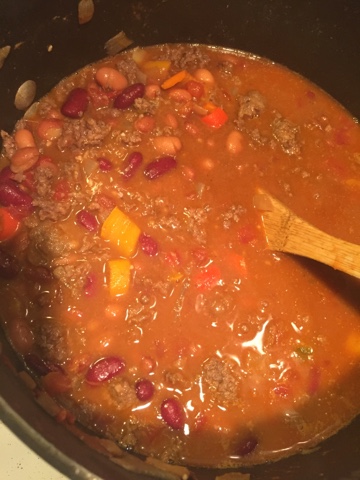