Things That Aren't Even Things 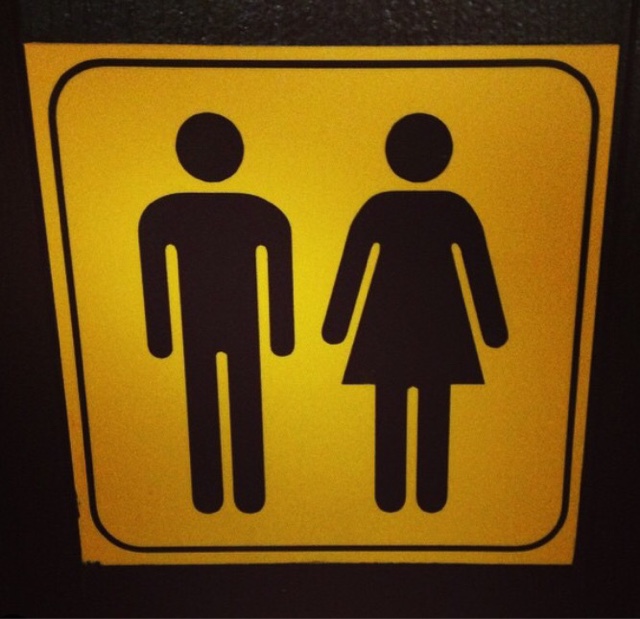 Ok, so here I go waxing all political which I keep swearing I will not do again, and will certainly live to regret, but I have to get this off my chest: All of this transgender/gender neutral bathroom garbage is a non issue. It's an excuse to vent prejudices and propaganda from camps on both sides of the gender identity issue line, and it's nothing but a lot of hot air, distracting from all the Real Issues in this crazy mixed up world. So here I am, adding my voice to the clamoring din, trying to make it stop.

Let me tell you why this whole conversation is an exercise in vanity:

1) You won't know when a transgender person is sharing your bathroom, because DUH, they look like you. This is where a lot of ignorance comes to play in this issue, because apparently when people hear transgender they think drag queen and assume she-men will be sneaking into the stalls of innocent young girls. Wrong. There will be women in the women's room and men in the men's room, and unless some of y'all want to be the genital checking police (which STILL won't guarantee biologically assigned gender identification), you won't even know when you bump into each other going in and out the door. Unless you spend your entire life in Northport, Washington, I guarantee that you have peed next to a transgender person and not only did you survive, Y'ALL DIDNT EVEN KNOW.

2) In many places in All Over the Globe, bathrooms are shared/gender neutral. Human beings (boys and girls both) have been taking care of business in side by side, gender neutral fashion world wide since the first latrines were dug in the Garden of Eden. We do it all the time, 'Merica. Get real. Also: Why are you looking? EW. Really, the only place this seems to be a problem is at Target. Or Walmart, but I can think of far scarier people sharing my bathroom there.

3) Guarding gender specific bathroom rules like flipping nazis won't keep perverts and rapists out of ANYBODY'S stall any more than gun laws will keep guns out of criminal's hands. How can you possibly not see this argument that you are so keenly fond of? BAD GUYS DON'T FOLLOW RULES. Don't be dumb.

4) Do you really want a man, full on, bearded, muscular and swarthy, coming to pee next to your little girl, just because he was BORN A WOMAN? Think about what you're demanding. Furthermore do you want a woman in a micro mini skirt waltzing in to the men's room because she was once a boy? Is that somehow a solution? And again: HOW WILL YOU KNOW? GENITAL POLICE?!?!?!?!?

5) This is an issue in our schools because of A) ignorance based fear fed by parents and B) kids who grow up together witness the TRANSformation from one gender to another, which can be understandably confusing and certainly uncomfortable. High school is a rough enough time for every kid coming into their own, and transgender kids have an extra shitty experience figuring out how and where they fit. Locker rooms and bathrooms at school represent the crux of that process for many kids, regardless of sexual orientation, gender identification, or any other part of Becoming A Person. Why are we, as adults, trying to make it harder? It's like the fearmongers are all romanticizing the locker room experience when it used to be so friendly and kind... I was homeschooled but I still don't buy it. Why would it be so difficult to create a safe space? Whether you agree, disagree, support, condemn or feel Appointed By God to Call Down a Hellstorm of Judgement on transgender people, I think most of us can be thankful that YOU don't get to decide anybody's life but your own. So bug off.

7) If you continue to make Rules About Bathrooms, you should probably consider making gay people use the bathroom of the opposite sex, to avoid all those lustful restroom interludes where somebody who might be attracted to you in IN THE SAME BATHROOM! *GASP* So, all you lesbians, regardless of your girly status, don't put me or my daughters at risk by sharing our bathroom. And all y'all gay guys, trip on over to the ladies room so you aren't molesting the straight boys at the urinal... NONSENSE

8) Or what if we all just got over ourselves and our shame and our opinions and just let everybody else pee in peace. #yoursmineours #bewhoyouare LOVE>HATE 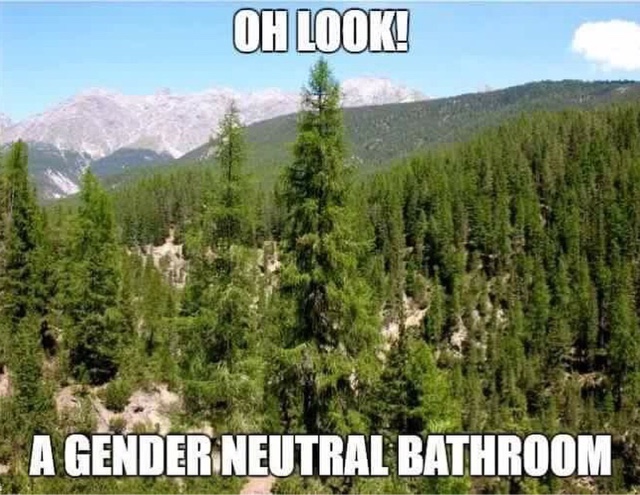 NOTE: For a brief and candid look at the history of gender specific bathrooms, check out : This Blog Post

at 26 April No comments: