Last weekend I went morel hunting with one of my besties. Mostly it was a good excuse to get out into the hills on 4 wheelers and I was really not much help since I barely even knew what a morel looked like. But I learned a lot on that perfectly warm Sunday afternoon about morels and morals and mountains and why good excuses and good friends are so important.

It had been awhile since I had spent much quality time with this particular friend, since her life had been thrown into crisis mode with more than one very sick family member shortly after she had surgery on her foot. Finally, everyone was back home, most of them on the road to recovery, and she was fully ambulatory. We were overdue for a frolic in the woods, no question.

Both of us being EMTs, we were, of course, prepared for any misadventure. Equipped with the appropriate 'hydration' apparatus, our guns, proper footwear and adequate sunblock, we tore off through the forest in the late spring heat. The summertime dust hadn't found it's way through the April shower-soaked earth yet, so it was the perfect touch of wind and sun on our faces without choking clouds of moon powder.  It's hard to overstate the power of a wordless conversation between friends on a back road over the noise of a four stroke engine. Sometimes there just aren't enough words, or the right words, to cover all of the Bad Things that can happen over the course of a month or two. 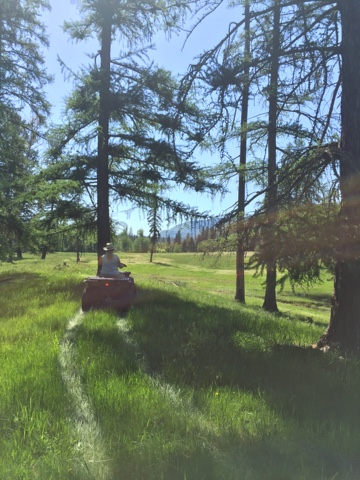 Not that we didn't talk. Of course we did. We got off the bikes and hiked up around a big fancy solar powered surveillance set-up of some kind that Homeland Security runs up on top of the mountain. We solved all of the world's problems from the very tip-top of our little corner of it. We talked about missing out and messing up and when you know that you've made the Right Choices, if you ever do. And then we dropped into the deep, dark recesses of creek beds and shady enclaves where morels most certainly waited for us.

I have always believed that everything happens for a reason. The good things, the bad things - there's a moral to every story, an intention behind every action and a cause for every effect. But I think sometimes finding the moral in a story is almost as hard as finding a morel in a forest. Sometimes the bloodsucking pests are in the way, sometimes they're covered with overgrown foliage and sometimes, you just don't see them. My friend, the experienced morel hunter, rode right past a bumper patch that somehow caught my eye. And that's what friends are for. Helping you see the morels in your forests or the morals of your stories. Helping you make sense of the senseless things and make sure the effort does not go without reward.

Turns out it was more mosquitos than morels waiting, but we did find a few mushrooms. I've decided that per capita, the ratio of morels to mosquitos in any given area is about 1/712. Each tender fungal delight cost us approximately 17 mosquito bites. Of course, both of us being EMTs and ready for anything, we had plenty of repellent with us. Oh wait: no. Not a drop of DEET to be seen for miles. Not that anything was visible through the cloud of Cessna sized pests that followed us like a superhero cape flying off the back of our four wheelers. Being a clever and ingenuitive kid, I dug though the first aid kit and came up with a packet of BioFreeze which we slathered all over our bare arms. Interestingly enough, mosquitos don't like the icy-hot burn of muscle gel and actually buzzed off until the menthol vapor had disappated. Life hack, FTW. 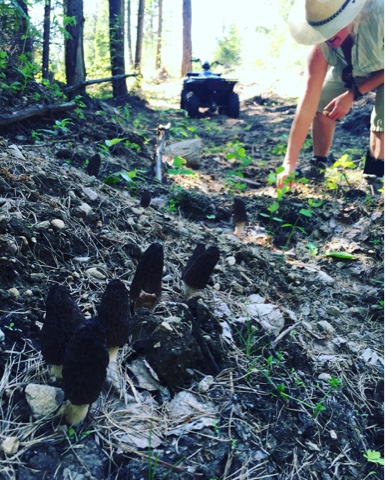 But it was worth it. Eventually we outran the bugs and got back to the business of Fixing Life and divvying up mushrooms. It occurs to me that there is no perfection quite like a sunshiney warm day with a good friend and no place important to be, except right where you are. In the cloud of mosquitos or on top of the mountain. To smell the season-wakened poplars and the rain that's rolling in off the clouds to the north, without any demands or requirements - this might be heaven. To follow the tracks of the wild things, sit in the old clearings of our great-grandparent homesteaders which have given way to nesting elk and rustling snakes, I can think of no greater privilege than to live in this unhurried, unviolated space with some of the greatest people I have ever met who are helping me find my morels and my morals- this is wealth in it's richest form.