Things About The Dentist

I don't care how bada$$ you think you are, getting dental work done is just plain miserable. And this coming from a girl who has her mouth wide open and flapping most of the day...

But I also struggle from a mutant strain of claustrophobia that makes me cut all the necks out of my t-shirts so they don't "choke" me, and keeps me from tucking sheets under any edge of my mattress - in case any random body part needs to make a rapid escape. So imagine my delight at a plastic-and-metal contraption rammed sideways in my mouth preventing me from closing it, swallowing effectively or even worse... Talking!

I went to the dentist, I thought to have my teeth cleaned the other day. NBD, right? Apparently I had my teeth cleaned in March and my memory (like a steel trap) withheld the information that this was a cavity filling. A cavity of proportions much larger than expected, according to the very nice and not at all judgement Doctor. Who told me that it actually "wrapped around." What that means exactly, I have no idea. Wrapped around the root? The nerve? My entire jaw?

Anyway, I got lucky this time and they actually offered me nitrous. You know - laughing gas? Actually the way the conversation went was this:

Me: is that an option?

DH: sure if you need it!

So anyway, they hooked me up to this fighter pilot mask and started pumping this air into my lungs that smelled faintly of juicy fruit gum. I was waiting for the irrepressible urge to laugh (because why else is it called laughing gas) or some euphoric sense of peace and tranquility. But mostly what I noticed as she crammed the massively invasive dental dam in my mouth and smothered me in drool bibs and germy sunglasses, was an innate sense of every-little-thing's-gonna-be-alright.

I mean in the back of my head, there was a certainty that I was going to suffocate on a pool of my own saliva and a collection of foreign objects piling up in the back of my throat, but for whatever reason (I.e. Nitrous Oxide) it seemed perfectly alright. I nearly choked to death when the dentist and his hygienist were talking about popcorn chicken from KFC and I tried to participate in the conversation. I guess the laughing gas made me forget that I wasn't really able to talk around all that paraphernalia, no matter how dear the subject matter to my heart. I gave up in a fit of coughing laughter and gave up trying to be garrulous during the procedure.

Really, the filling went pretty quickly, and despite not being able to opine on the merit of KFCs popcorn chicken vs a new local burger joint, I made it through with only one near drowning experience an no full-blown panic attacks. So I would give the nitrous a thumbs up for making a terrible hour and a half slightly less terrible. I have been thinking a bottle of that stuff would make life in my house more bearable on certain mornings when Everyone wakes up fighting. 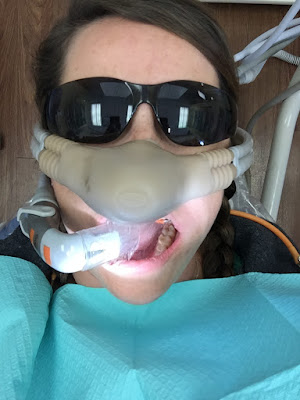