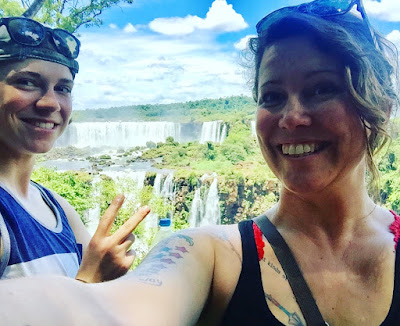 I decided to go to Brazil with my 20 year old daughter. I have no idea why. The opportunity presented itself, and, since South America is one of the very few remaining continents I have to visit (just antarctica and Australia left now!), it seemed foolish to say no. I was also moderately uncomfortable with my oldest daughter doing this new-fangled thing called couch-surfing (back when I was a kid we called it being a hobo) all over Brazil by herself, staying with random strangers that were probably human traffickers posing as nice South American families with comfortable couches. So, by going to Brazil myself, I could obviously prevent All the Worst Things from happening to Halle, being the formidable and intimidating character that I am.

It seemed like a good idea at first, which is often how ideas start out. And then it started to seem like a questionable idea, but I had committed to Halle. And then it seemed like a terrible, scary and irresponsible idea and I am much too old and broke and nervous to be traipsing around South America like a 20 year old with no bills or dependent creatures, but I had already bought the ticket. So Brazil was happening, and I pretended to put my worries aside to go enjoy the burning hot equatorial sunshine and 97% RH. 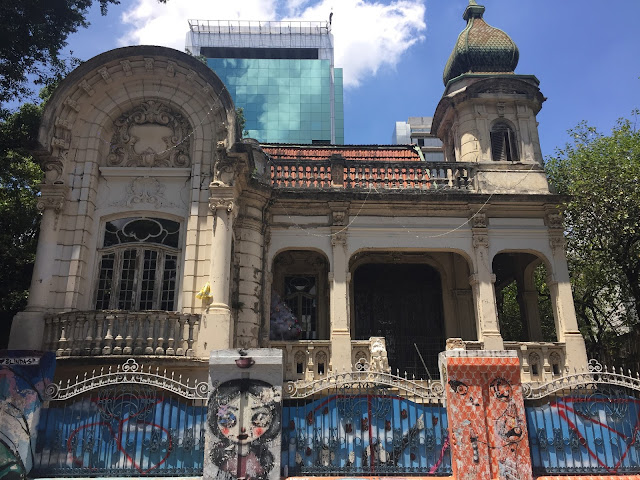 I spent two weeks in the 5th largest country in the world. Brazil occupies almost half of the continent of South America. It is the largest Portuguese speaking nation in the world, and the only one in South America, having been claimed as a Portuguese territory in 1500. The fascinating thing about world travel is that no part remains untouched by the cultures of other places. Before I went to Brazil I spent a few days in Washington DC with my family for Christmas, and was able to visit the recently opened National Museum of African American History. Wandering through those halls, and then revisiting the replicated history of enslaved people in South America (Brazil was one of the last large countries to abolish slavery), made me wonder what our worlds would look like if the slave ships had never reached our shores. Everything would be different. But that's a tar baby I won't tackle here. Brazil is rich with the combined culture of the native Amerindian, enslaved African transplants and European occupational influence.

But most importantly, in January, Brazil is hot. SO HOT. Hot as Hades in the Devil's summertime. The average daily temperatures while we were in Rio were in the high nineties, with relative humidities to match. It took me two weeks to acclimatize, so I was just about comfortable in time to come home to -18 degree mornings at home. One thing for sure, this trip wasn't about being comfortable.

The thing about traveling with your 20 year old daughter is that she's 20, and you're not. And she's your daughter, and you're the mom. So there is a little bit of a weirdness there. Mostly it worked out great because if I was up for partying (see exhibit A: New Years Eve on Copacabana [maybe in the next post]), I could party her into the ground, and if I wasn't, then I would just go to bed and worry about her getting partied into the ground by someone else's mom, or more accurately, getting mugged at a street party in Rio without me there to protect her. 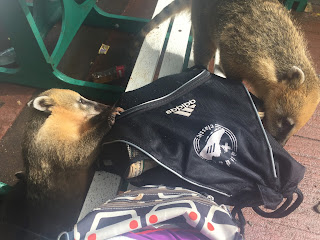 We packed our two week schedule tight, and even so we only scratched the surface of Brazil's southeastern coastal area, with the exception of a two day excursion to Iguacu Falls, the largest waterfall system in the world, wherein I made friends with a pack of very naughty Coatis and accidentally didn't book a hotel room for our first night. Luckily things worked out somehow, in spite of our total inability to communicate with the poor hotel clerk who was working at 2 AM when we showed up, sans reservations.

But Iguacu Falls, or Iguazu Falls, as it's called on the Argentinian side where we also visited (passport stamps, yo!), was my first taste of the wild and dramatic summer storms of South America. It was amazing and beautiful. Before we even got to Rio Halle introduced me to what would become a survival staple, Pao de Quiejo, which I still have great difficulty pronouncing and just decided to call Bow-chicka-Bow-wows. Bow Chickas are like little cheese-bread balls made of manioc flour and parmesan. What's not to love? 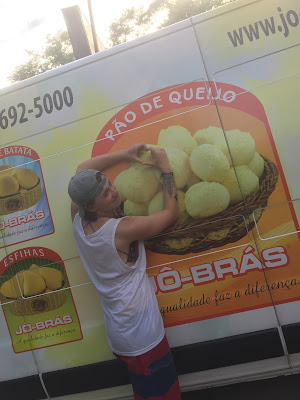 There is no way to encapsulate the entire trip in one blog post, so I will be back with more, after I sleep off some jet lag.
at 13 January