This morning I decided to start a juice cleanse. The explanation for this is a long and boring story with outcomes that nobody wants to read about so I am just going to skip ahead, except I think it's important to note that THIS MORNING I decided I was going to live on nothing except purple juice that tastes exactly like what I imagine a cat's butt tastes like. But I can only imagine.

At 8:36 AM I decided to go on a run. This was probably ill advised for several reasons which vary from a torn labrum in my hip to the way my leggings fit. But the real problem was Frank. One of the big reasons I got Frank, another dog (which was questionable decision regardless of outlying circumstances) was to be my running partner. Out on remote country roads, so he could like, take on cougars and bears and stuff. And my lack of motivation, which is a more ferocious adversary than either of the aforementioned. Frank was a good running partner. He always wanted to go just a TEENSY bit faster than me and just a TINSY bit farther than me. He was good on his leash and didn't argue with me about running music or complain when I sang along to Beastie Boys.

I tried to take Frank on a run with me this morning, but he wouldn't even go around the block. He couldn't run. I knew he hadn't been feeling well lately since he hadn't been eating his food, let alone everyone else's food in a three mile radius. But I though maybe it was just a funk and he'd do better after a run to his favorite spot in the whole world, The River. But he couldn't run. He couldn't even walk. I called the vet.

The vet turned out to be super busy today. I think the entire chihuahua-mix population of northern Stevens County was on hand for their 6 month check ups, including one pug cross that actually had earrings. Blue sparkly ones. I think they were stick ons, but still. They did work Frank in, and after some waiting, and some temperature taking and some concerned looks and HMMMS and HUHHHS from the vet assistant and the vet, they took him back to get an X-Ray of his chest.

Frank's lungs, according to the X-ray, were completely filled with fluid. So full that the vet was unable to see his heart, which was not beating correctly, at all. "A pretty serious arrhythmia," the vet called it. The fluid in his lungs was putting so much pressure on his heart that it couldn't even beat right. He lay there, panting, struggling to breathe. Struggling to keep his heart beating. The vet said the prognosis with lungs like that wasn't good. It could be a tumor on his heart, it could be a genetic valve weakness that ruptured. It could be a trauma like he got tagged by a car on one of his walkabouts. Or it could be rat poison. The only way to tell would be a trip to Spokane and a massive vet bill to try to find out and the slim chance of a fix.

Frank is the young one. He's the big, tough, healthy hound. Truck was the one that was supposed to go to be with Jesus any minute. He's dying of cancer. Frank is fine. Now my house feels like a dog hospice center. The Doghouse. The place where All the Dogs come to have All The Fun. Not come to die. This is a hard one. I drove home, ugly crying, of course, and trying to sort through what I did wrong, what I was supposed to get out of this, how I could have prevented it, what I should do next, with one hand on the steering wheel and one hand on the panting back of a Very Large Bloodhound.

I don't know the end of this story yet. We will go back to the vet tomorrow to follow up. But Frank The Bloodhound could use your prayers. And me too, I guess. ❤️ 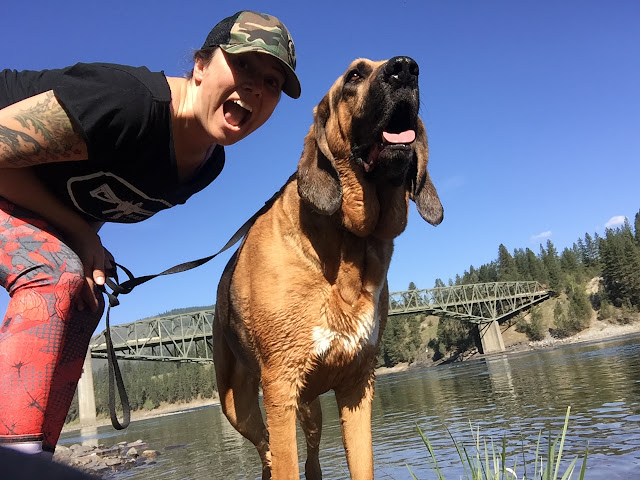