Things I Am Able To Do

I would like to say that I have never given up on something because it was too hard, but that would be a reckless untruth. I, as the epitome of a comfort seeking creature, have many times walked away from a project or a dilemma because it was too frustrating or physically challenging, or because The Universe was set against me and no solution was in sight. Maybe I have even done this with people, which is a thought that makes me very sad. One of my daughters was just telling me how she can't do anything, because nothing works for her. Setting aside the gross overstatements, it's an attitude, or even an overwhelming feeling, that I have modeled for her in the moments that she has seen me quit.

While I am definitely guilty of quitting, I have also been successful at pushing through hardships to accomplish things, even when I was not entirely sure of my ability to do so. As I listened to my daughter huff and puff about the impossibility of ever accessing a website since her password was wrong (one of my GREATEST pet peeves and lessons in anger management), I was wrestling with a broken pellet stove and a Phillips screw driver that had no intention of behaving as I imagined a screwdriver should. It was a three hour contest that ultimately, after a few tears of frustration and MANY calls to the stove shop, I won.

Within the first hour I wanted to quit. By the second hour I wanted to throw the screwdriver through the window. I realized that the alternative to me overcoming the stupid thing meant waiting until after Christmas for the only repair guy in town who charges $69 an hour and $1.90 per mile to come to my house. This adds up to hundreds of dollars after you add in parts and troubleshooting and the time it would take to lecture me about my shoddy maintenance in the last four years. So by the third hour, I was determined that victory would be mine.

There I was, belly down on a floor that smelled suspiciously like a Weiner Dog hadn't used the dog door last time she needed to potty. I was frustrated, irritated, uncomfortable and WAY out of my comfort zone. But after eliminating all of the other possibilities, I found the problem, and I fixed it. I did it because the several hundred dollars I would save were worth more to me than the irritation of having no idea what I was doing. I did it because I could stop for a minute and remember why it was important for me to keep going.

Not because I am the smartest ever. Or the most clever (in fact, later I would discover that I broke a different part in fixing it and have to re-fix the damn thing). Generally speaking, I avoid hard things. But I did it. And I can do it. And I don't have to rely on somebody else all of the time. I just have to take the steps. To keep taking the steps once I identify what's important to me. And when one step doesn't get me there, I take another and another... and my whole life is full of steps that aren't getting me there. But then again, maybe they are. Unless there is really here, and I have actually arrived, and I just need to see this topsy-turvy journey as the destination.

It's not all fun. But it's all good. And while there are lots and lots of steps, there are no wrong turns. Just hard work and learning and I'll be damned if I'm not gonna try to find the joy in it, or at least the upsides. Like for instance, a newly mopped floor and a merrily burning stove. And marketable knowledge worth $69 an hour and $1.90 a mile. Because now I am a pro. 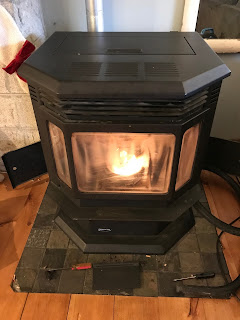