Things That We Didn't Do: On Baja Dogs and Breezes 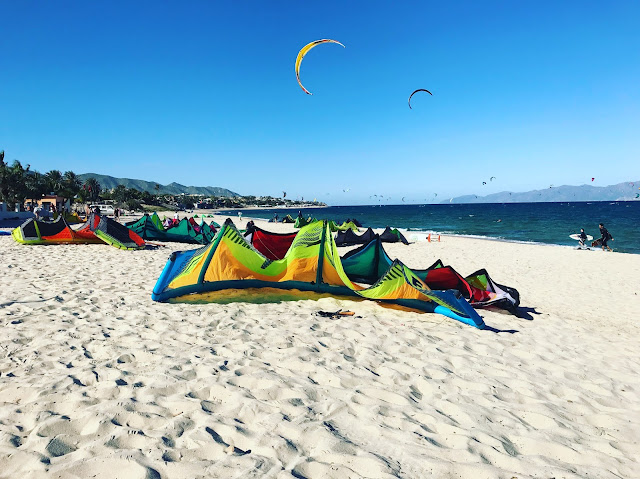 We came to La Ventana to kiteboard, or more accurately, He came to kiteboard. I came for the beach and the beer and the warm sunshine on my face. A little fishing village nestled into a protected cove on the Sea of Cortez, La Ventana was founded in 1940 by a disenfranchised pearl diver and his family in search of a new beginning. Most parcels of land in the La Ventana bay were co-opted by the government, subsidizing small family plots until 1996 when Mexican law changed and granted ownership to the longtime farmers and ranchers who had worked the land for generations. La Ventana became a mecca for wind sport enthusiasts in the 1990s as the daily El Nortes (northerly fronts)  make for a wind sport enthusiast’s wet dream. It was a history I could relate to - a new beginning and the dream of doing my job somewhere that wasn’t cold and dreary. Anywhere that wasn’t the snowless frigidity of post-holiday wintertime in the northwest.

We got into La Ventana just in time for dinner on Thanksgiving night, and by some miracle, one of the little restaurants squeezed us in for an all-the-trimmings turkey dinner buffet, sans reservations. Later, He would say how it was the best food we had the whole time we were there, the piles of deep fried turkey and mashed potatoes so creamy that they couldn’t have been real. Even the wine tasted better than the merlots we had back home. I would agree with Him, except for the bag of totopos that the last residents of the Casita had left behind. They were salty and perfect. I couldn’t stop eating them at midnight and for breakfast, and while we laid out in the sun on the plaster roof top in the late morning the next day.

All I wanted was a space of seaside to sit next to and write. Or daydream. Or drink. Maybe all at once. There was seaside, all right. Miles of it, white and sandy and the perfect amount of warm. Occasional Canadian kiteboarders drifted by, and the fourth generations of the family farmers, picking up sticks off the beach and being chased by little white Baja Dogs everywhere. 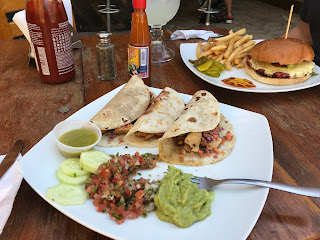 Late Friday  morning, we walked three miles along a dirty highway to cash in whatever tourist panache we had for a couples massage at the only large resort in town. We paid the going rate willingly, if for no other reason than to feel like we could afford it, and then we tromped back down the highway and then the three minute trail of sand and clay from our Casita to the beach with all of His kiteboarding gear and sat expectantly in the sand, waiting for the wind to pick up. And waiting. And waiting. In between the waiting, we wandered over to Baja Joe’s where everybody goes for coffee, and then beer, and then tequila, and some killer Asada Tacos. Saturday we repeated the process, but with less waiting and more tequila, the kiters bemoaning the quiet air over their Pacifico and nachos. Frustrated windseekers found solace in the mellow beat of a reggae band at Joe’s on Saturday night, the dance floor carelessly littered with multinational escapees of all generations and some of the farmers.

There wasn’t much accounting for Sunday morning, thanks to the Peyote IPA and the number of Baja Fogs that Paula the bartender made for us the previous night, but by afternoon, the waiting game began anew, and in anxious earnest as the wind picked up just enough to rustle the palm trees in the courtyard at Baja Joe’s and tease all of the pent up athletes. Kiters with small physiques and large kites hustled out to the beach to catch the gentle breeze, but those of greater substance knew the wind wasn’t enough to carry them offshore, so the wait continued. 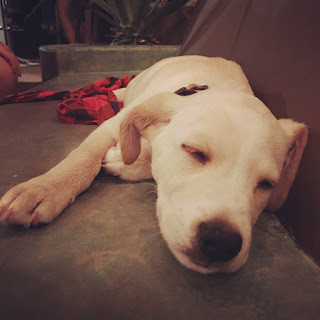 I didn’t do very well at proving that I am good at working “anywhere,” since unplugging and not caring about work seemed so much more important than getting 18 new stories cranked out and all of my deadlines met ahead of time. But it was heavenly. No place to be unless we wanted to be there, and nowhere to go except where our feet would take us. Lazy afternoon siestas were punctuated with walks up and down the beach for food, catching sunrises and sunsets if we felt like it, counting the constellations we could name and making up new ones. After a few days we found the Baja Dogs on our heels like the farmer’s kids, weaving in and out of kite shops and little make-shift patio restaurants that most of the locals seemed to run as a by-the-way businesses along the beach.

Another night at Joes’ brought in a cover band that played everybody’s favorite song from all generations and genres. The dance floor was full of expatriate and unfulfilled kiteboarders dancing to “Jesse’s Girl,” locals still wearing the uniform of the restaurants next door from the shift they just finished, old run-away hippies and Baja Dogs. Pacifico bottles rolled across the paving stones and beer splashed between the toes of bare feet while the band played AC/DC and Elvis covers. That night nobody cared that the wind hadn’t come for them. That night the moonlight and the tequila and the music was enough.

He only got out on His kite once, and even then it wasn’t His kite, but a bigger one that He rented, hoping the bit of wind that picked up one afternoon would do it. It didn’t, and after fighting His way down the curving shoreline, He endured the walk of shame back up the beach, board in hand, to get back to the more readily accessible sport of beer and tacos and dreaming up ways of smuggling Baja Dogs home to the northwest. Secretly, I didn’t mind the lack of wind, mostly because I was selfish and liked Him next to me on the beach. But Him being next to me made for less work getting done and more lazy wave-gazing, watching the hermit crabs scuttle sideways across the beach and staring at the cloudless sky as if the wind might suddenly appear visibly. I wouldn’t call it a loss, for Him or for me. 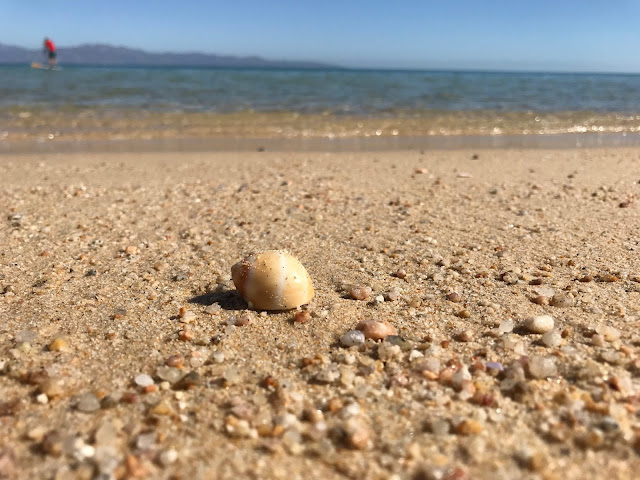