In all fairness, staying in hostels was probably my favorite part of the trip to Brazil. For all of my grown-up complaining and fit-pitching, I can't help but smile when I think of the people and the things that I got to experience in hostels.

Our first Hostel was in Rio de Janeiro. In case you don't know, Rio is a city of 6 million people, which is about 5,999,627 more people than I am really comfortable sharing a zip code with at one time. Our Hostel was located in the Santa Teresa neighborhood, known for it's colorful and artsy culture and the perpetual party atmosphere, which is obviously why I desperately needed to stay there. Because parties. Until at least 9 PM. We shared an 8 bunk room for 5 nights with 6 boys that rotated in and out like migrant shift workers from various continents. There was finally one other girl from London there, a bronze-skinned bohemian beauty who flitted in and out like she owned the place, which, if you consulted any of the 20-something international romeos in our dorm, would be the general consensus.

I was without question the oldest person in the hostel, which I would estimate houses anywhere from 20-75 people on any given night. I was also the only mom. Being a mom has it's definite advantages, as a few of the kids will respect your age and sleep needs by tiptoeing quietly around the darkened door room after 9 PM when I usually holed up in my bunk for the duration of the night. Halle was able to take full advantage of the perpetual party atmosphere and hit up some of the street parties and famous Cachaça bars and Samba joints. 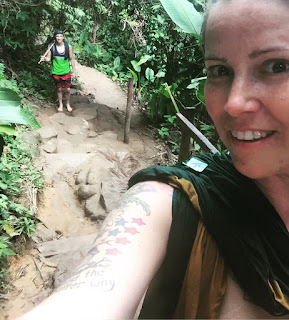 One night, a friend of the hostel owner who was a Syrian refugee cooked dinner for the entire hostel - some amazing rice and beef dish with peanuts and I don't even know what. But it was really good. That night I stayed downstairs with all of the kids and drank caipirinhas and Antarctica beer like it was going out of style. In case you were wondering, a caipirinha is a traditional Brazilian cocktail made with limes, simple syrup and Cachaça, which is a spirit distilled from sugar cane. And it's delicious. I might have had a dozen or two during my stay.

The best part about staying in hostels is, hands down, the super cool and friendly people from all over the world that you get to meet and subsequently, hang out with. In every hostel (we stayed in three) we got the best tourist tips, sometimes tag along local guides and help getting everywhere we wanted to. 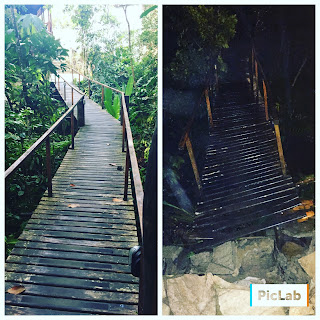 The second hostel that we stayed in was in the middle of the Mata Atlantica Rainforest, in a little hippie beach town called Trindade, and couldn't have been more different from our urban hostel in Rio. We spent the one day that we had in Trindade hiking to beaches that were squirreled along rustic coastal trails, slip-sliding in our Havianas in the mud from torrential downpours that happen at least once a day. While we were there, we sat out one of the awesome storms in a great little restaurant with good local beer and an American classic rock cover band. In the meantime, back at our hostel, the wood slat bridge that spanned the small creek between the main hostel lodge and the bunkhouse where we were sleeping collapsed when one end of the bridge support sloughed off in a miniature land slide. The minor catastrophe also cut off the water supply to the the entire hostel which meant that we were relegated to drinking the cheap beer on hand at the hostel. It was a super fun night, like camping with cousins when the power goes out. We played UNO with some kids from the Netherlands and I am pretty sure I didn't win.

I would tell you that the last hostel we stayed in was my favorite except that I really like all of them for different reasons. Green Haven Hostel in Ubatuba (yes, it's a real place) was located directly across from a big beach where giant, lifted tractors drive out into the surf with trailers to pick up boats that come into the bay. Ubatuba is the surf capital of Brazil, and while it took a little doing to find the "best surf beach", we finally did, and Halle got a lesson while I soaked up the last full beach day that we had in Brazil. It was exactly everything that I imagined Brazil would be. Turquoise water, crashing waves, and beautiful bronzed bodies of all shapes and sizes. And then we went back to the hostel, where they hosted a killer Brazilian barbeque and partied all. night. long. 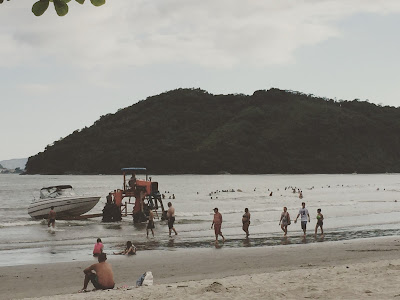 Hostel living certainly isn't for everyone. In fact, I am not sure it's even for me, but it was a memorable experience, every sleepless night of it. Halle was insistent that the night that we spent at a hotel robbed us of the cultural experience that a hostel provides, and while I enjoyed the "private" bedroom and a bathroom and shower all to myself, I have to admit that I missed the adventure and intrigue of sharing a house with 50 strangers from all over the world. Even if I was the only mom. 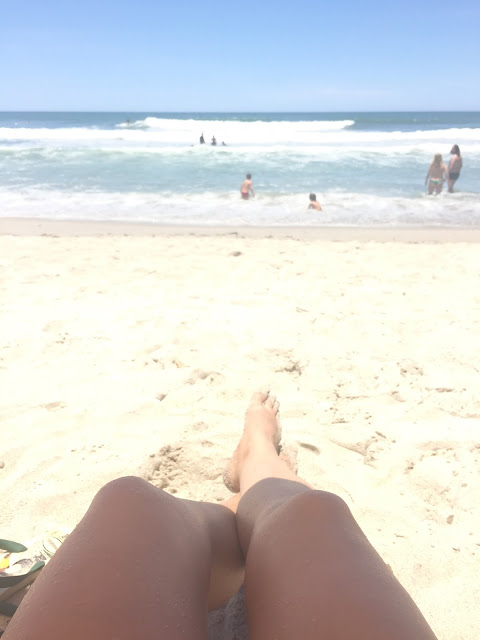 at 22 January No comments: