So I am doing this THING, for work, which leaves me with lots of free time on my hands and my bosses say they like it when I am bored. That’s great, except usually when I am bored, I write, and my bosses apparently don’t like it when I write. Last time I was doing this THING and I wrote, I nearly got fired, so I am gonna try to be more careful. In fact I have been told that I can’t write about the THING I do for work, when I am at work, in case I say something BAD. Words like “inappropriate”, “representation” and “make us look bad” have been thrown around, so to be safe, I am not going to say where I am or what I am doing. Just in case. And I am not going to tell you all of the funny things that happen, or that people say, or that come in my lunches, or anything. In case.

Instead I am going to write about things that are not here, wherever it is that I am, that may or may not be right next to an ocean and some poison oak. Instead, I am going to tell you a story.

Once upon a time, for that is the exact space in history where all true adventures begin, we planned a quiet weekend. The weekend had completely nothing in it, except for beautiful couches and some TV and maybe a pizza or two. It was perfect. Saturday morning dawned sunny and beautiful, with no Obligations or Responsibilities. Then the phone rang. A certain set of parentals were stranded. It seems that an aged Cadillac, which was in Very Good Condition Otherwise, had given up the ghost somewhere around that place on I-90 where Noone lives. You know the spot? Well the parentals luckily knew someone who lived not far from Noone and they caught a ride to civilization, towing the Good Condition but otherwise dead Cadillac with them, and then they called us.

We, being good, caring offspring, always willing to help and having no other plans that day, decided (with some hesitation) to go rescue the parentals as good, caring children do. It all started off OK. A planless weekend had just morphed accidentally into a road trip weekend, as the parentals needed a ride to the Land of Ports, where they would get a rental car to use until their flight home to Florida a few days later.

Being always up for adventure and also Very Accommodating, I was especially excited for this unplanned road trip because it was my first time meeting the parentals of Someone that I like Awfulmuch. The Someone might have been a little less enthusiastic, because for one thing, he already knows his parents and it’s not nearly as exciting as meeting new ones, and for another thing, couches are Very Nice. But me, being such a good shoulder-whisperer that alternates a little carelessly between angel and devil, I talked him into how much fun a road trip would be.

We picked up the ‘rents in Ritzville where they said goodbye fondly to the Cadillac in Otherwise Good Condition, and headed south and then west toward Portland, talking of other road trips and cars and trucks and things that you talk about with parents you’ve just met, like the weather and what kind of jelly you like. The trip was fine, even though it was hotter than the gorge has been in memorable history and we hadn’t packed any ice cream.

After dropping the parents off at the airport, and then re-dropping them off at the airport when someone realized that someone else needed something else from someone’s wallet, we, just The Two of Us, went on our merry way into the Big City to stay in a Big City Hotel and eat some Big City Food. Or we would have, if suddenly the Jeep we were riding in hadn’t decided it needed an immediate and unarguable break to cool down. Somehow we got off the freeway and onto a side street in downtown Portland, where we hemmed and hawed about what was broken, how to fix it and whether or not someone could send a helicopter to take us home. No helicopter came, but an ambulance did deliver some pizza to us while we waited for a tow truck to find us. Turns out that downtown Portland is a long way from any tow trucks. 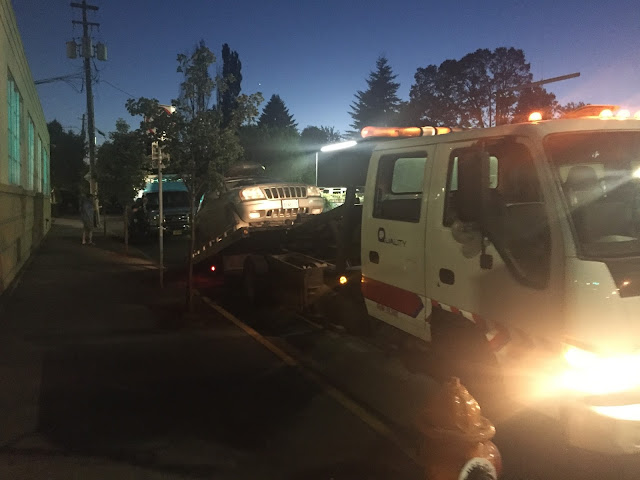 Deciding that whateveritwas that was broken was not going to be easily fixed on a downtown sidestreet in Portland on Saturday night after everything was closed, or Sunday morning when everyone was at church, we opted for a tow out to Astoria, where the parentals had headed in their cheery red rental car just moments before. We figured that fixing the problem with some help, another car for the inevitable running around that it would require, and a place to stay, made more sense than sharing a room with the guy in the cardboard house on the street where we were parked.

I wish I could remember the tow truck driver’s name, but I am not sure he ever gave it to us, although I can tell you that he has three daughters, all redheads, he works lots of overtime and he is a proficient sleep driver. It took us at least a zillion hours to get from Portland to Astoria in the tow truck - hours which were punctuated either by awkward conversations with the tow truck driver about his red headed daughters or watching his head nod sporadically toward his chest in little narcoleptic fits when we weren’t asking him questions. The worst part was that when he was sleep-driving, he would go the speed limit or slightly over, getting us more quickly to our destination, but the minute we would ask him a question and he would start responding, his foot would come off the gas pedal and the rusty, whale-like truck would slow to 22 MPH for the entirety of the conversation. It was completely impossible to decide which scenario was worse, but I was snuggled up next to Someone I Like Very Much on the World’s Most Uncomfortable Bench Seat with my feet up on a tool box that wouldn’t close all the way until 2 in the morning, and I didn’t even mind.

We finally got to Astoria, and a beautiful hotel room (with a pull out bed, of course) overlooking a beautiful bridge and biscuits and gravy for breakfast and a Dutch Bros right up the road. It turns out that the fix wasn’t too hard, once we figured out the problem with some parental help (what goes around, comes around?) and before long, we were back on the road toward home, only a few hours behind our original unplanned plan. 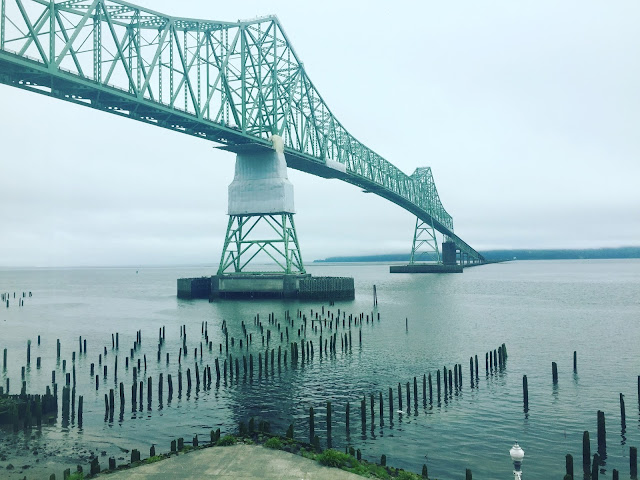 They say that Adventure is merely lack of planning, which can be kind of exciting, especially for Someone who is a Planner. I think that Adventure is more like a plan with a question mark at the end, or one of those choose-your-own-ending books that leave a few pages blank, just in case. I like question marks and blank pages a lot, and I also like Someone who is a Planner a lot, and even though our do-nothing weekend turned into late nights and troubleshooting and problem solving and miles and miles, it was a good adventure, and I wouldn’t have undone it, even if it meant that the Cadillac in Otherwise Good Condition would still be alive. Which is fine, since the parentals have recently replaced it with an aged Pearl White Cadillac that is also in Otherwise Very Good Condition.