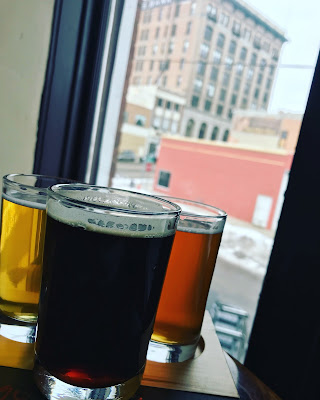 I am sitting in the second story of a building in downtown Butte, Montana, that used to house a newspaper, more than 100 years ago. The narrow plank wood floors show the carefully restored wear and use of what was probably the photo and lithograph developing area, based on the chemicals they encountered during restoration, according to the current inhabitant. A “reasonably good-looking” in his own words, and “epically talented” brewer, he’s the man behind Muddy Creek Brewery, which, according to Google ratings, is the best brewery in Butte. Whether Google raters know anything remains in question, but Muddy Creek seems to know their beers. A sample flight brings me three blondes, a thick vanilla stout and an obligatory IPA (this is, afterall, a microbrewery). Any other flight with multiple blondes would normally sound better as a sexual encounter than a beer tasting, but Muddy Creek mixes it up just right.

Being a 'professional' beer connoisseur, my methodology for sampler consumption is quite scientific, if not flawed. I always try them all and then drink the balance from least favorite to most, so I can savor and enjoy the best beer, leaving the establishment with the taste of it still on my breath. I say flawed because as we all know, after the first four or so samples, it doesn’t really matter two shits what they taste like. It’s all delicious.

In the case of Muddy Creek, it was a mid-afternoon time-killing stop wherein I didn’t plan to hang out for unending hours redefining the meaning of inebriation. But in spite of the steady stream of right-on-the-brink of too-loud classic rock (my least favorite genre), I feel right at home here. The beer is good and the tables, crafted out of old cable spools, coupled with late 1800s woodwork give me the industrial warm fuzzies. It helps that they let me bring my road weary dog in from the car so she could lie in stiff tension on the wood floor, staring at the resident stuffed black bear named Stout, just across from our table.

My plan was to stick with a modest four sample flight before moving on responsibly and checking into my budget-priced Econolodge room for the night. But the reasonably handsome master brewer insisted on throwing in a sample of his Storm the Door Vanilla Porter, and I didn’t want to be rude. That fifth sample, after all, spells the end of productivity for the day, unless you count a blatherous post about beer and the merits thereof.

But back to the beer: The Dirty Blonde was a basic, easy drinking, 5% ABV classic golden hued blonde. None of that over-hopped hipster microbrewing overkill. It was comfortable and good. The Blue Sky Blonde, which the epically talented brewer says is their most proliferously distributed beer, is a blueberry blonde. I am not one for fruity beers, and I have been out-blueberried a time or two, but this one is a winner with a 5% ABV. The berry factor is subtle enough for the manliest of rednecks to abide with. The Mandarin Tango is another 5% ABV blonde with some subtle citrusy and other almost unidentifiable flavors that were good, but bordered on a visit to Bath and Body Works. Still a smooth drinker, lots of my Budlight girlfriends would dig it. The Skinny Cow IPA was a good IPA at 6% ABV. Not one of the cleanest ones I’ve tasted, and nothing that I wanted to send a postcard to my ex-boyfriends about, but if you’re an IPA drinker, which I am when the mood takes me, it’s doable. Storm the Door was a good vanilla stout, the talented and handsome brewer wasn’t wrong, but not being a dark beer aficionado I would have to defer to one of my more surly friends for a professional verdict. It clocks in at 6.2% ABV. The fact that I didn’t hate it was good enough for me.

After my accidental flight of five, I found myself with a full pint of the Dirty Blonde. Like the talented and handsome brewer says, it’s the only place in town that you can have a dirty blonde and not leave with an STD - an especially poignant statement considering the longest operating brothel in United States history is very literally just down the street a few blocks.


While the whole town of Butte with it’s rollicking hills and crumbling brick buildings won my heart, Muddy Creek certainly clinched the deal. I want to come here and buy the whole town and make it the next Dollywood. Except cooler. Never have I seen so many extremely badass buildings lying vacant and hopelessly abandoned. I am glad Muddy Creek made a home here in the old newspaper office, and it feels just about right to sit here with AC DC and type my little heart out next to a dirty blonde and a mini dachshund. 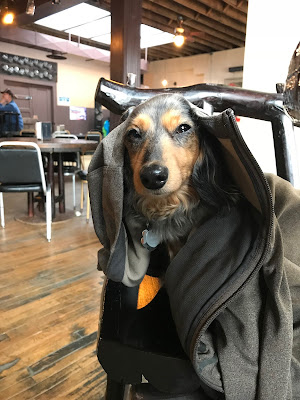 at 27 January No comments:


I wasn't going to post in this blog anymore. I feel like it's time to shift gears and move into a new space. But I have been a little bit emotional lately and sometimes my feelings feel better when I give them words. Maybe it’s the weather. Maybe it’s hormones. Maybe it’s that I’ve been to Mexico, Washington DC, Denver, celebrated Christmas with The Whole Family, bought a house and moved, had hip surgery and commuted over 5,000 miles in the last month and a half. Who can say exactly why I burst into tears at random intervals or the minute I hear anything by REO Speedwagon. It’s a mystery for sure.

All I know is that I feel awfully fragile, and not in a completely bad way. Just… RAW. Ready to feel all the feels and work through them. The sadness of moving away from the town where I have lived for the better part of 20 years and (mostly) raised my kids. The excitement of starting fresh, on my own, as a homeowner. The struggle of trying to decide whether to let my old Truck dog go be with Jesus or watch his frustration over a new life in a new house with limitations that I never enforced on him back in Northport, much to frustration of the baseball coaches and custodians of the school next door.

I am feeling all the tearing of the transition of my kids from children to adult, weighing out how much I can and should help them in the fight to become responsible humans. Sorting through how much is My Fault and what I have to let go for them to figure out. I am riding the waves of happiness and uncertainty that a fairly new relationship pushes toward the shores of my heart. Most moments I feel lost. Some moments I feel joy. All moments lately, I feel fear.

But what I do know is that all of these feelings, the good ones and the bad ones, are meant to bring me to the place where I belong, wherever that is. Fear and uncertainty protect me from wandering recklessly off course, bringing caution along as a guiding light of stability. Sadness and grief remind me of how very much I have been given in the happy years I have had at my old place and with my old dog. Glimpses of joy give me hope that the steps I am taking are the right ones, headed in the right direction. And stress and anxiety, well, they give me gray hair, and I guess I am about due.

For every time my heart cries out silently to the universe for help, I turn back to face the battle and the help I need is there. Not always in the form I expect in. Not always in a surprise check for thousands of dollars or an army of strong backs, although those things have happened for me, but sometimes in the showing up of a friend with a story, or in the plight of another friend who has much larger hurdles to face than I do, and a way that I can help them with the flood that is drowning them.

Amor Fati. I am in love with the fate that I am given. It is not always beautiful, but it is always mine. And while I question my decisions every. single. day. I feel overwhelmingly blessed that I have decisions to make, and they are mine entirely. There is no wrong that cannot be made right. There is no obstacle that cannot become the path, and even now while I can’t lift my arm, I can say that there is no pain without purpose, even if that purpose is a speedbump.

I will slow down. I will take only the responsibilities that are mine to bear, and no more. I will listen to MMMBop on repeat and cry wantonly if it gets me closer to peace. I will write the stories to pay the bills to make the life that I have chosen. And I will always be thankful that I can do that with a beer in one hand. 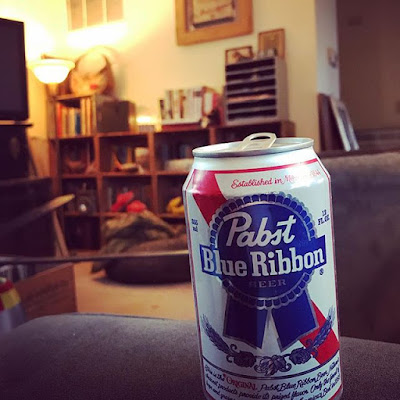 at 09 January No comments: