The thing about the human mind is it's a closed loop. I mean, things get in. Lots of things, all the time - we are introducing new information into the little speed track in our head. But once something is in there, it never leaves. Even when you think it does. Even when you can't remember and you want to... it's still in there. Even the things you want to get out of your brain, they circle around and around and around. Like that time you saw your great uncle in his maroon underwear. Or that Selena Gomez song. It's there for keeps. Sure, you can practice real hard at filing those undesirables away and make a habit of repressing them. You might even be successful at forgetting most of the lyrics, but it will ALWAYS be there, somewhere.

I am not a bible thumper, usually, but there are a couple verses that I memorized as a kid that still surface in my thoughts at semi-useful times. One of them is the verse from Second Corinthians (yes, that's a real book in the bible, you heathen) that talks about taking every thought captive. Sure, it goes on to talk about obedience, blah blah, and in context it's about vain thoughts that are irreverent, which might be the thing in the world that I am best at, but the practice it refers to is a useful one.


"...Casting down imaginations, and every high thing that exalteth itself against the knowledge of God, and bringing into captivity every thought to the obedience of Christ..."
2 Corinthians 10:5 (KJV - because I may be a rebel, but I am an orthodox rebel)


This is one of my antidotes to anxiety. To grab the thoughts swirling inside my head, sit them down and try to filter them through an objective lens. It doesn't always work, but sometimes just the exercise of it gets my mind into a different rut than the panicked frenzy that it was prior to the attempt. And when you think about it, it's pretty much a rephrasing of what the great stoic philosopher Seneca said, that we suffer more often in our imagination than in reality.

“We are more often frightened than hurt; and we suffer more from imagination than from reality”

If I had a nickel for every time some random thought crept into my mind without any real basis and wrought havoc on my soul, I'd be a zillionaire. We all do it. At least I think we do. Or maybe I am just fucked up beyond all recognition. Thoughts like "nobody even likes me." Or "I'm such a dog," (welcome back, 1988). Or "the way he said goodbye - he was so happy to leave me..." or "my kids can't even stand me" - that's a good one. Where do these thoughts come from? If I knew, I would have the thought generator fired. But I can't, so there they are, forever in my mind. I can grab them one at a time and have a Reasonable Conversation with myself about the fact that they are erroneous. I might even be able to convince myself, but after awhile, a new wave of trauma, real or imagined, will wash them all out of the places where I have them neatly filed and they will slam into the walls of my mind with new ferocity.

And the waves never stop coming. Sometimes it's a tsunami after a break-up, or the death of a loved one, or when Hannah Montana quit being available on Netflix. Sometimes it's the gentle persistent lap of repeated hurts over time that erode the banks where we have stored those useless, baseless thoughts. Sometimes it's a hurricane of stress and life changes that leave everything in your mind topsy turvy and disheveled. Sometimes there are just SO MANY THINGS on your mind that it begins to pile up like an episode of hoarders and the bad thoughts are all mixed in with the good ones and the necessary ones and the memories and they begin to tarnish everything.

How do we keep that shit cleaned up? I guess it's one thought at a time, just like a recovering hoarder, or after a hurricane. One by one, taking them captive, looking at them, putting them back where they belong. I guess trying to be prepared for the waves, trying to catch them when they're falling out of the vault, before they impact the serenity and stability of your day, of your imagination. Before they become worry and anxiety. Lock that shit up. It will never be completely gone, but you can see it for what it is and file it away and keep an eye on it so it will have a harder time escaping next time.

There's no perfectly beautiful solution, because there is no perfectly beautiful mind - except Russel Crowe's, of course. But there are steps, there is a pathway to being less crazy. I've been walking it for awhile, in my own meandering and imperfect fashion. The bible talked about it to the Corinthians. Seneca said it before Jesus was an itch in the Holy Spirit's toga. It's a thing.

Human minds have been inventing fear and trouble with their minds since they've began using them. Check out the wild imaginations of the earliest cave artists if you don't believe me. Our minds are the monsters that haunt us. Our mission is to conquer them. 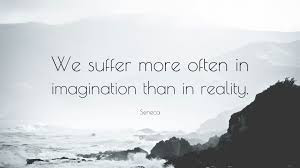