Things About Feathers and Angels and Heroes 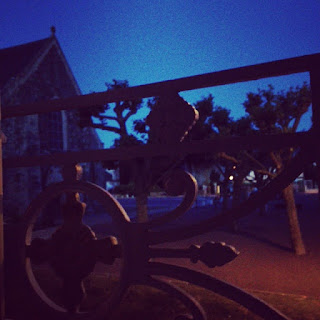 In 2015, my life was forever changed during a very short visit to the shores of the Normandy region of Northern France. My fascination with the history of the World War II battles that transpired there had made it one of the most compelling places in the world for me to visit, and I finally got to, with my mom and Dad (who is also a war history buff) and sister. What I experienced in the brief time I spent there in the surf, on the once blood-soaked sands where the fate of the world changed forever on that June day so long ago, in the villages that still wore the battle scars from days and weeks and months of onslaught, and in the American Cemetery at Normandy - what I felt, I don’t know that I’ll ever have words for. 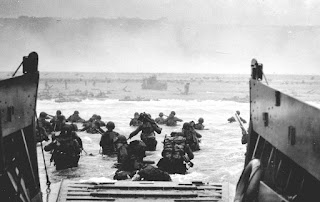 We stayed the night in an old bed and breakfast overlooking the town square of Sainte-Mère-Église. my bedroom window looked directly out on the bell tower of the old churchyard where American paratroopers had dropped, miles off course from their intended target, and many had met a quick end, falling into German guns like gifts from above. I stood in the moonlight by my window that warm June night in 2015, some 71 years later, and could see it all happening. 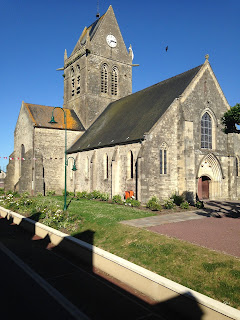 But the most surprising revelation on my trip to Normandy wasn’t on the beaches where the boats landed, or the cliffs that the Rangers scaled, or the cobblestones where thousands of American boots marched, although those places left a deep mark on me.

The most peculiar and unexpected awakening happened for me at a castle. The most ironic part was that I wasn’t very happy to leave the battlefields and war museums to visit a castle, but my family was keen on it, so I went along grudgingly. The castle had once functioned monastery, and a prison, and many other things throughout the centuries. 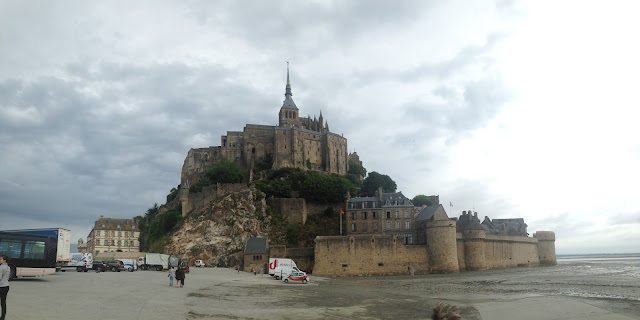 The dramatic spires of the place jut up out of the ocean from the giant rock perch where Mont St Michel sits against the backdrop of the English Channel. The ancient church is an island when the tide comes in, and somewhat inconvenient to reach even when the tide is out. Surrounded by sea water or bog-like sand, the old monastery and it’s supporting village were built in and ever climbing spiral upward, as the rock allowed no more outward growth.

Toward the top of the man-made mountain is a Great Hall, where perhaps once Kings and nobles dined. Where once monks chanted in echoing reverence and solemn glory.  The ceiling of the great hall, arching nearly 30 feet overhead, was filled with floating white feathers. Suspended magically in the air by some invisible force.

I asked several people what the feathers meant. I went home and googled it, and found no cohesive answer.

While I was there, I sat in a courtyard and wrestled with my own soul over some of the never-ending personal battles I was facing. I was staring up at a golden statue of St. Michael, the patron saint of soldiers, law enforcement, fire fighters and EMTs. The monastery was dedicated to him, and emblems and depictions of the arch angel were everywhere.

I sat there, while my family milled about the passageways and halls of the ages old stone buildings, and I had a talk with St. Mike. I made him some promises, about keeping my faith for as long as he would keep my brothers and sisters safe. The cops I love and the soldiers. My firefighter daughter and all of my friends on the line. I promised I would hold fast to believing in the protection he offered and the reasons that so many people run bravely into the fray for the freedom and safety of others.

St. Mike answered me, in a way, with the feathers, which, three years later, I learned were part of an artists display for an evening event. But for me, they were the floating remnants of a battle between good and evil. Pieces of an angel's wings left suspended throughout the ages as he wrestled the dragon. I saw the fight between right and wrong, between freedom and tyranny, between danger and security being waged in a timeless space that continues every day that brave men and women engage in the battle.


Shortly afterward, I had the feather of a Red Tailed Hawk tattooed on my arm, because those are the feathers of my homeland (now you know why!), and because I wanted a constant reminder of the war being waged and the pledge between me and St. Mike for my loved ones. Most days I wear his medal too, right next to my heart, where I hold the faith that good will always triumph, as it did on that fateful June day so long ago in Normandy, when thousands of heroes ran up against the dragon of evil and remain buried on that shore.

Normandy will always hold a very special place in my heart, and I can't wait to go back and have another chat with St. Mike about our deal and all the ones we are proud of. 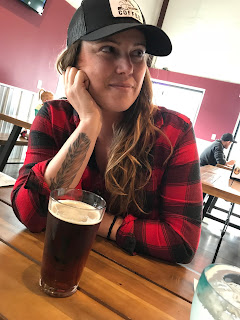