Things About Manifesting (And Me Being Always Right)

I recently had an argument with a friend about the whole idea of manifesting goodness in your life. You know, that hinky, feel-good contrivance about imagining how you want things to be in your life and making them magically unfold through boundless optimism and faith? Like what that silly book The Secret was pushing.

Anyway, my friend was insistent that it was working for him, because he had some good things fall into place once he decided that they were going to happen. The argument basically went down like two one-sided discussions where I told him he was wrong because what REALLY made things happen was his hard work and focus, and he ignored me and continued heralding the praises of manifesting things out of thin air through nothing more than optimistic thinking. Whatever. If it works, it works, I guess, although I still maintain that he passed an important test because he actually studied and worked hard, and not because the Cosmic Powers decided he was joyful enough to grant him an Advance to Go card.

I don't think manifesting is the thing. I think what really helps is the DECIDING part, where you completely settle on what it is you want, and then start moving forward to make it happen. It's the waffling indecision that holds us back from plunging head and heart first into the Really Important Things. I mean, you don't get a job by sitting on the couch and imagining how great it's going to be. You get a job by convincing an interview board that you're the BOMB, because you've decided that you want. that. job. But you still have to go through the hellish interview process and iron a suit or decide which eye shadow is the least whoreish.

You don't build a strong relationship by hoping things work out and waiting to see. It takes risk and hard work and pain and digging in your heels.

Just like you don't pass a test by believing that the answers will mystically emerge from your noggin, you pass a test by studying hard and removing distractions that block you from accessing the information that you've put in there. Or by taking Ritalin. Either way, you've decided it's important, and you make it happen but going there and doing the thing and feeling the stress and overcoming.

Last year I read some self-help book that I can't remember now that changed my way of thinking about how I went after things that I want. I've always been trapped in this learned helplessness of predestination and The Will of The Lord for my life that is completely ensconced in happily-ever-after fairy tales and meant-to-be bullshit. It's only in the fortieth year of my existence that I am really coming to terms with the ownership of my own "destiny" and the importance of my decisions and choices - not necessarily on what happens in my life, although as much as possible I am learning to exercise control where I can, but more on how I respond to the things that happen around me.

I'm slowly evolving from the intimidated position of choking down the sludge that I am dished out in belief that it's what I deserve based on what I have been told by the outside world, to knowing and believing that I am the one who gets to decide what I deserve and can digest the consequences of my actions accordingly, along with the rewards of the fearless taking of what is mine without remorse. Crappy things happen in life. Sometimes we don't deserve them. Thinking I can avoid them by imagining good things is just a setup for major disappointment.

But good things happen too. Not because I imagine them, but because I have decided to move forward one (sometimes painful) step at a time in the direction that I know is right and that opens doors. Sometimes, occasionally, or, if I am honest, often, The direction that "I knew" was right ends up being slightly off course, but I have learned from experience that there is something down every path for me, even if it's the wrong one. Because no wrong turns. Because sometimes the wrong way ends up being the adventure you didn't expect that changes your life. Sometimes it seems like a lucky break, but most of the times I've been lucky it's because a step that I took somewhere along the way put me in the position to run into an opportunity. Seneca says that "Luck Is What Happens When Preparation Meets Opportunity," and I want to be prepared for the opportunities, not just wishing for them.

If manifesting works for my friend (who is still wrong), then that's great, but I see the hard work that he's doing, the steps he's taking, to "manifest" the good things and open doors in his life. If he wants to give credit to some higher mystical powers for his wins, that's his choice, but I plan on taking credit for the shit that I have to slog through to get where I want to be.

I believe in good things alright, I can see them in my mind's eye, but imagining and hoping isn't the thing. It's the getting back up and dusting off your ass when life kicks you square in the gut and tells you to stay down - that's what wins the day. It's the courage to ask for what you know you deserve, and not apologize, which I am still learning. It's the balls to keep going, step by step, down a path that sometimes seems bleak and endless and lonely, knowing that right around one of those corners all the trudging will pay off for a little while. But it's the trudging, not the dreaming, that gets you around the corner.

So what he calls manifesting I call manual labor, or hard work, and we can agree to disagree. (But I am still right.) 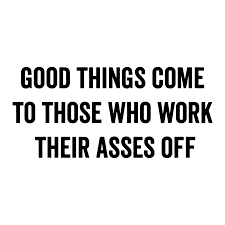