Here's the thing. I hate being told what to wear. It probably has something to do with denim jumpers and verses in Leviticus, but for whatever reason, biblical or otherwise, it's a trigger point for me. Stand to reason of course, that my life would be made up of a series of questionable wardrobe choices and violating societal mores that result in being told, more often than not, to go change what I am wearing. I even got sent home from school one year when I was teaching because a visiting parent didn't like a fire hoodie I was wearing.

When fire season rolls around, I have to brace myself for the inevitable wearing of the required uniform. The anti-airflow Nomex pants (there is a reason Gold Bond is so popular out here) and frumpy, scratchy shirts (unless you score an old school yellow off an aging DIVS who has outgrown his), and as a Public Information Officer, the dreaded POLO SHIRT.

Someday I will write a blog about polo shirts and how they fall into the same category as capri pants and visors. But footwear. Footwear is the greatest struggle for me. I prefer to live wild and free with as little confinement on my feet as possible, like flip flops. Fire boots do not fit this lifestyle preference. Nor do many other fire camp shoes I have tried.

I have discovered, through more than one helpful talking-to from people in logistics, safety, or occasionally the IC himself, that flip flops are not acceptable footwear in fire camp, even if I call them tactical (this designation helps the moccasin, however, see below). So, being the careful rule-follower that I am (ahem), I gave up trying to get away with wearing flip-flops in fire camp years ago (even though some of my direct supervisors may say otherwise [JIM]), but I will confess pushing the boundaries in my choice of fire-camp footwear in lieu of my go-to standard.

Coming off the line after 12 hours of sitting in my truck (ok, sometimes I hike too) in stuffy fire boots that stifle my creativity and inhibit my cross-legged sitting habit, I am eager to get into something more comfortable as soon as safely allowable, or sooner, if nobody in overhead notices. These are some of the fire-camp footwear frontrunners that I have either experienced or seen.

Lightweight, easy, ridiculous. Sure you can, but why? That's all I will say here.

I have several friends who can or will only wear Keen shoes. I get it, they are versatile, and they scream "I am an avid outdoorsperson who also values comfort and durability." What's not to love, right? Keens are OK, but I have tried over 20 pairs and haven't found a single style that fits my foot correctly, so these aren't a great option for me.

This is the fire camp standard. This is anyone with an O number that wants to convey the message: "I am fire qualified (hence the nomex) but have advanced in years and/or experience to the level of daily comfort footwear. But I am also ready to run."

I have worn various iterations of running shoes which invariable make me feel like a poser (since I don't run unless it's to save my life) and although they're lighter than boots, they still require tying and all of the difficulty of putting on that every laced shoe demands. The payoff is in comfort and good pedal support for long days on concrete, wood chips or a folding chair.

Over the years, I have worn baldies (Chuck Taylor's, for the uniformed), which are ok until late season wet fire camp grass or soggy sawdust penetrates the canvas and they never dry out. This year I bit the cost bullet and got a pair of Altama Low Tide Raid Shoes from Grunt Style because they looked really rad. Like baldies on steriods. Like I am actually a badass, and not just a wannabe. These are pricey (I can get you 20% off if you're interested), but they are water resistant (kept my feet dry in a torrential downpour) and if they do get wet, which they're designed to do, it drains out these cool little spots that double as breathable vents (making them cooler than your run-of-the-mill Gortex footwear), and they dry STAT, which I think means really fast in emergency-room-tv-show lingo. Also they are worn by actual badasses, so there is that. 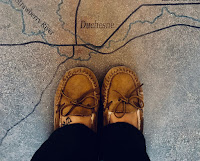 This is my absolute favorite, when I can get away with it. Depending on the fire assignment, the management team, and how many effs I give, these will pass muster. For about the last four years, I have been wearing Minnetonka Cally Moccasins. The first couple of years, I wore one pair into tattered little pieces of unrecognizable leather. Now I bite the bullet and get a new pair at the beginning of every season because they get trashed around camp all summer, and because when they're brand new they're SO SOFT AND SQUISHY inside that it's like wrapping your feet in baby bunnies. If I have to explain why this is a good thing then there isn't much point in continuing this conversation with you. In the medical unit, these have been a lifesaver. Or a footsaver, at least. I have been asked to refrain from wearing them in some camps, but I will keep trying until Tactical Moccasins are universally accepted as camp-appropriate footwear. Maybe I can work in a diversity argument and my Native American roots... except I haven't got any.

So there it is. Everything you never wanted to know about what to put on your feet in fire camp, or any camp for that matter. And lots of pictures of my feet, which are fairly important feet as far as feet go. The have a lot of traveling to do.
at 20 July