I can't say that this summer was the best of summers.

It certainly wasn't the worst. But it was far from the best.

In spite of a mediocre and almost disheartening summer, I learned a lot. And a lot of good things happened. And I think that all of those little bright spots are really the best. Because a bright spot can make the worst day better.

Sometimes life is hard. Like when you have to wear something other than sweatpants. Or you run out of cream for your coffee. But sometimes, when life seems like it's the hardest ever, somebody shows up with the Little Ray of Sunshine that you just needed. And the jeans don't choke you quite as much, and the black coffee almost tastes good. I learned this summer that people do change. Maybe it isn't the people that you were hoping would change, but somebody did. I think I have changed a lot this summer. In some ways I have gotten stronger. In other ways I have come to terms with my weaknesses. And in both ways it's good.
at 03 October No comments:

Things About This Week


The first week of October used to be a good one. 15 years ago on October 3rd, I gave birth to my fourth and final kid, and for once, I was in a hospital with a real doctor. I even had drugs. Granted, I was afraid of being paralyzed by an epidural (nobody messes with my CSF!), so I opted for something else that I had never tried. The doc gave me Stadol when I got to The Best Part of Labor (clearly sarcastic), and while the painkiller never seemed to touch the pain, I was transported to this alternate reality wherein I was some ultra-hot and feisty Latina Gangster, bossing my minions around the birthing room in my flippant New-York-Hispanic accent.

Luckily my delusion didn't transfer over since the nurse later said I was just glaring at her really meanly the whole time, but I remember having very fancy fingernails while Montgomery Gentry's "Hell Yeah" blared from the little alarm clock radio, followed by Faith Hill's "Breathe," which I remember thinking was ironically appropriate, even though I could not express that to the people in my room because I was far too busy telling off my putas (don't look that up, mom) and making drug deals in my head.

And then 8 years ago, the first week of October became something else. My sister and her (then) three kids were in a terrible accident, and we were about THISCLOSE to losing most of them. She was almost full term with her fourth child and her first daughter. The baby didn't survive the wreck.

I got a call from an EMT friend with a scanner who knew it was my family. I'll never forget that call. I lived in Bend at the time, and I remember rounding up my kids from their various and assorted schools and leaving town in a big hurry. Kizzie still had her Volleyball knee pads on when we left town. We drove like hell to get there, because the only thing I knew was that it was bad. We weren't even sure we'd get to say goodbye. My sister and one of my nephews had been flown by fixed-wing air to Spokane and the other two boys were in the hospital in Colville in various stages of being transported south for treatment of multi-system injuries.

I'm an EMT, right? I've been on some bad wrecks, I've dealt with the blood, the guts, the limbs postured in unnatural ways, even the dead bodies that I've had to work on, to try - just try, for families. But nothing could have prepared me for the sight of my own sister, an unnatural shade of greenish white, bruises all over her body only hours after the wreck, in that hospital bed. Before I could even say hi, I had to step back out of the room and put my head down by my knees. The whole hospital hallway was spinning out of control. It took me a couple minutes to be able to stay upright long enough to hold her hand and weep with her.

In the days and weeks and years leading up to that event, my large, very close and very opinionated family had seen turmoil. Division and hurt and events that give even the most loving families pause in their close-knit relationships. That moment erased all the petty differences that had created wedges between us. The reality of life's brevity and the tiny instant that can change everything suddenly make nothing as important as loving others and knowing you are loved by them. No points to prove, no issues to discuss, not even being right is important in a moment like that. We are all stripped to a level of equality that is based entirely on the humble experience of the fragility of life. None of us has got shit to defend. Period. There is nothing so important that it should break love - death does that soon enough.

A couple years later, a close friend was badly injured in a fall during the first week of October. The sole provider for his family, it sent all of us close to him back to the trenches, pulling together to get them through some of the scariest moments of that we've had to endure. These moments, when our human frailty is paramount to our goals and plans and dreams, are the moments when the truth of who we are as humans prevails.

Since then, the first week of October has brought us mass shootings in Roseburg, Oregon in 2016 at a community college, and last year the murder of 58 people in Las Vegas at the Route 91 Harvest Festival. If a random slaughter isn't enough to make you stop and think, then you're doing it wrong. For many people, the first week of October changed forever 25 years ago today, when one of the most intense 15-hour battles in U.S. military history took place in Mogadishu, Somalia. One hundred American Soldiers held a force ten times their size off in an attempt to rescue the crews of two downed Black Hawk helicopters. 17 Americans were killed, and the bodies of slain soldiers were dragged through the streets. The violence was captured on film and changed the landscape of our recent military memory forever. A new generation of heroes was born when those images infiltrated living rooms across America.

The first week of October has become, for me, a moment to remember what's really important. And maybe I am overly dramatic, but even that thought process triggers an avalanche of conflicted emotions for me. I'm about 36 hours home from 80 days on fire assignments this summer, a record for me, but even as the paycheck posts to my account I reflect on the summer and I wonder if I am doing it right. Should I be here more? What am I missing out on? How would I pay the bills otherwise?

I listened to Warren Buffet's 5/25 principle, the idea that if you don't focus all of your energy on the five most important things to you, all of your efforts and investments get watered down and diluted to the point of ineffectiveness. I sat kind of dumbly after listening.

What five things are the most important to me? Making sure my last kid gets turned loose into adulthood with a reasonable hope of success? Traveling? Not being in debt? I feel like the truest answers to the Five Important Things question are maybe the irresponsible ones. What if the most important thing to me is saving all the dogs? Can I put my kid up for adoption to facilitate that? Or what if my Number 1 priority is not being alone? Then I'd have people lined up to counsel me about the Joy of Loving Myself and offering to pay for therapy. I realize I am off on a total rabbit trail here, but it's been a Very Long Time since I wrote anything for myself, and there's a lot of words bound up in this head.

Anyway, today is my first and maybe only "day off" in awhile. Obligation free, other than some cupcakes that need making, a few articles I want to write, and a doctors appointment to see if they make a drug that helps one discern the Five Important Things. Is that Adderall? If it is, I want it.

But for today my five things include: Loving My People, Taking the Steps, Making the Birthday, Fixing the Broken and a lot of quality couch time with my one Tiny and Insecure Dog. What are your Five Things Today? I hope at least one of them includes some cuddling. 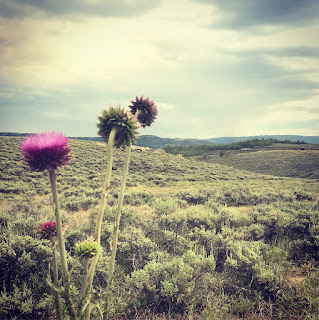 at 03 October No comments: