Things About Being an Influencer

I'm learning a lot lately about gratitude. What it is, once you get all up into the ugliness and the light of gratefulness shows you the silver linings. I'm learning that gratitude doesn't mean no pain, and it doesn't mean perfection. It just means being able to have faith that there's something good in everything that happens.

We live in a world of competition and comparison. Never has this been more of a cultural force than with the advent of social media and the instantaneous flaunting of airbrushed, filtered and doctored beauty and strength. We are bombarded with images of what life should be, making us critical of our own pathway and the complicated beauty that surrounds us.

There's an entire industry built around these so-called "social media influencers," beautiful people living their "best lives" surrounded by products and places that are paying for the exposure. What a great gig. I'd like to get beautiful and have a job like that, get paid to just be awesome and do awesome things, but when I think about how and what and who those people are "influencing," I am not so sure they're as big as they think they are, no matter what their follower count looks like.

I have a love-hate relationship with social media, and the fact that a lot of my work revolves around Facebook and Instagram audiences sometimes makes me feel a little panicky inside, like there's no escape, especially when I measure myself against the perceived success of a lot of people I have never met. The hate side is compounded by the holier-than-thou sneer I feel from a lot of people who "aren't on Facebook" or some other such aloofness to the shallow happenings in cyberspace. I am not always there because I want to be, and to be honest, some days it's a lot more vulnerability than I care for, but I know two things: I need to keep building and I need to keep being real - vulnerability is my gig, and I am grateful.

Some comments and scorn from people, even ones close to me, have caused me to shut down for periods of time, hiding in my darkened place of shame because my flaws are to glaring to be exposed. The funny part is, the largest part of that scorn doesn't happen online. Most of my biggest critics are live and in the flesh and too good for social media, judging me for daring to publish my inadequacies for the whole world. But the best social media influencers don't get hung up on their flaws, and that's what I am aspiring toward. 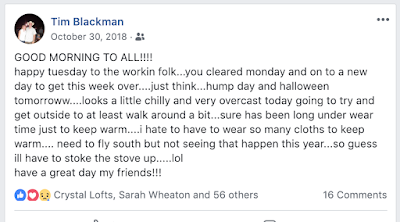 Recently, our community lost a great man. Tim wasn't the Sexiest Man Alive and he didn't live on a yacht in Trinidad, but as far as social media influencers go, I can't think of a better role model. Tim retired a couple of years ago from a lifetime of community service as a law enforcement officer, only to find out shortly after his last shift that he had terminal cancer. Tim used his last couple of years in the best way possible, and if anybody lived their "best life," Tim and Barb beat all those pseudo-celebrities to the punch, hands down. 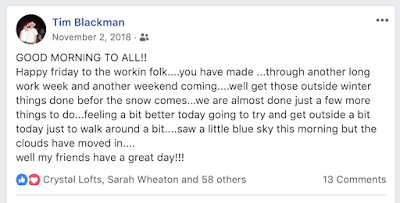 Tim became a presence on Facebook, in his last few months, every day that he could find the energy and strength he would send out a message of hope and joy, and most of all, gratitude, to the community. To us, the rag-tag band of Facebook followers that were lucky enough to know him, Tim delivered warmth and love and in his final days, we watched an outpouring back onto his Facebook page from all the people that he had touched that was overwhelming. Tim is maybe one of the few people who really understood the power that social media can have when used the right way. Or maybe he didn't understand, he just found a good way to spill some love around the community. But if there was every a good reason, or a good way, to be on Facebook, Tim figured it out.

Tim was a guy who spent his whole life using his brains and brawn to help other people, and as he felt his strength slowly slipping away, he found another way to give to the people around him. Never a complaint, while he endured what was probably overwhelming pain, Tim only had light to give. He modeled gratitude that wasn't hindered by the pain he was in. Far too young to leave this world, he faced his end with only encouragement for the rest of us. This is how social media should influence us. Not the bikini bodies and the gourmet meals and the polished fake perfection that we've bought into.

Tim and his Facebook world are one of the reasons I will remain a staunch defender of social media, in spite of its downfalls. The connections that I have built that I otherwise never would have are some of the most powerful in my life. I knew Tim from my work on the ambulance, but I grew to know who he really was in his last few months on Facebook. Tim encouraged me to keep sharing my pictures and posts, saying he was living vicariously through me, while perfectly healthy, active people were mocking my posts, Tim was getting a kick out of all of my imperfect adventures. Cousins that I now count as friends never shared a meaningful conversation with me until we stumbled across each other and our mutual struggles through Facebook messenger. Friends I have made on social media from around the world have opened up professional and personal opportunities for me ... Say what you will about it, but there is community in the cyber world. It's no substitute for the real deal, maybe, but in our jet-setting age, how precious to have a community you carry with you as you globetrot.

We don't live in rural pastoral villages with generations of the same families intermarrying like it used to be - well, most of us don't (ahem, Stevens County...). We live in constantly shifting and changing family structures and geographic locations and professional scenes, it's the nature of our world now, and it calls for a new kind of connection.

I am grateful for social media, and I am grateful for the opportunity to develop my own niche of influencing and enjoy the value, however flawed that I might bring to one person in my vulnerability. I am grateful for Tim and the role model he was, and I intend to mirror his gratitude and positivity in my own online world. There's no need for anything else, really. People complain about how fake or flawed social media is, but it's only as fake as we let it be. Tim made Facebook a real and beautiful neighborhood to live in. I want to be like Tim.