I've been watching Season 3 of the Handmaid's Tale, and I can probably place direct blame there for the deep, dark funk I find myself in this morning. Or maybe there something more real behind the sense of necessary dread I feel...

If you have never experienced the heavy hand of religious tyranny, the show seems outrageously fanatical, I am sure. I won't claim that I have been subjected to horrors on the level that Gilead has deployed in the series, but last night, when June was given a shroud to cover her mouth, indicating the silence dictated for her role, I felt my chest tighten and bile rise in my throat as I have many times throughout this series.

If you think that there are not people in this world who believe that God has told them the best prescription for your life, you are naive. If you do not know that some of these people believe the Lord has called them to the ruling class and that they are moving slowly, methodically into positions of political power (see Matt Shea), you'd be blind. There are, even among us in Stevens County, in Colville, people who believe that they are empowered by divine right to take leadership in our community to lead us down the path of their version of righteousness. They believe that they have been commissioned to bring the Kingdom of God, as they interpret it from the Bible, to play now, in local government. If you don't believe me, I have the church notes to prove it.

I lived in this world for nine years. Like the people who came out of Gilead and lived, tortured by the guilt of things that they were subject to and participated in, willingly or otherwise, I have kept silent about the very real threat to liberty that over-reaching religion brings because of a similar guilt. I have been a part of the shunning. I have stood in judgement of others, believing God called me to that status with the other Elites of the Kingdom. I am guilty.

I believe in liberty. I believe, like our founding fathers did, in the importance of being able to find, serve and worship God on individual terms. Many of us who were raised in religious homes deal with the daily struggle of guilt-driven morality, working to find our own meaning in belief and action, but living under religious leaders who profess to know and to tell you what God wants for you, demands of you, and even will not accept from you, through those leaders as exclusive intermediaries of His will, is a whole different level of spiritual abuse. This, and the intentional, psychological manipulation (based on this book, and others) of young, damaged and malleable souls, is something that leaders of the "Christian Community" to which I belonged will answer for.

I left that place because I could not imagine my daughters growing up and blooming under that tyranny, just like June delivered her baby out of Gilead with the help of her mistress, who acknowledged the same threat to any woman in the Kingdom of "God". My silence has been the red shroud of shame and acceptance of my role and my guilt. But now, I am part of a new community and my silence allows the quiet trickle of this apparently "harmless" disease into the places I live and work.

There is a time for silence, and there is a time for action. More and more I understand that my time to act is coming. The knowledge of what this means for my own life is of very little consequence if it teaches my daughters that there is no price high enough for the liberty to speak, pray, and live as God has given me the free will to do, under no man's interpretation of divine law.

I have more to things to say, but every journey begins with a single step. If you would like to join me on a journey out of my own Gilead, I invite you to follow me here. I ask for your patience and grace as I find my voice along the way. 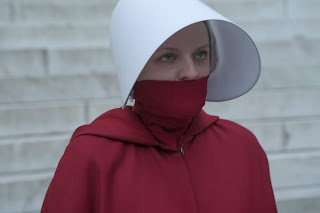