Things About Being Chosen: Hierarchy, Elitism and Playing Favorites

Throughout my time at Marble I had frequent head-butting sessions with Anne and Barry Byrd’s daughter, who was a few years older than I was.  As time went on at Marble, she would single me out to "hold me accountable" for an ongoing barrage of character flaws and trespasses against the community.  Being the presumptive leader of every prep-school or youth related activity, Dannie would send me home if she didn’t like what I was wearing, or tell me I was disqualified from performing because my home and/or my marriage wasn't in order. The hypocrisy of her treatment of me was absurd and profound. 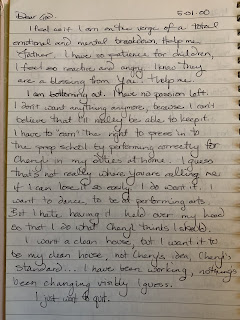 The Prep School spent several months one year, planning a trip to Washington DC (American Constitutional history and government was a big part of the academic focus of the Prep School curriculum), and I offered my services to help prepare a script and choreograph a performance that the students would share at churches and other organizations while they were back east. We spent weeks rehearsing. Dannie and I served as ad-hoc directors of the program. I was happy to be involved, even knowing I was not qualified to be invited on the trip.

During one rehearsal, Dannie sent me home to change my shirt when I came wearing an over sized white t shirt (chosen because it was not form fitting), with big black letters “FBI” printed on the front. My dad bought me the FBI shirt when I visited them in DC the year before. She was insistent that the letters stood for “Female Body Inspector,” calling in one of the male Prep School student leaders to validate her claim. Whether or not he agreed with what she was claiming was irrelevant. Nobody argued with Dannie about anything during this time period. It was far too likely that she would call Anne in to "mediate" the conflict and the reprimand for dishonoring her daughter would be relentless. Dannie demanded I go home and change. The situation was so absurd that I didn’t return to rehearsal that day.

While I was pregnant with MacKenzie, a closed-door Core Group meeting took place which we found out later was a shotgun wedding for Dannie and a local redneck. Not even into the beginning stages of  what Marble called the “courtship” process (a holy substitute for dating), Dannie had gotten pregnant and they were quietly married. The hush-hush meeting was followed by a community celebration which included a baby shower for the couple.

I remember sitting in the party feeling guilty that I noticed the disparity in public retribution for their fornication when I had suffered so greatly for mine. I kept reminding myself of the parable of the workers, who were all paid equally for an inequitable amount of work, and how the ungrateful ones complained that they were not paid more even though it was the agreed upon amount. And like Jesus said, the last will be first… etc.

All of this took place not long after Dannie was caught embezzling from the ambulance service where she worked in Colville, using the ambulance fuel cards to fill her own gas tanks. She spent three days in jail (these records should be available on request from Stevens County) and told our cell group that she was away at an EMS training. The disparity in treatment among community members was remarkable. In recent conversations with other former Marbleites, this preferential treatment has come up often. Anne and Barry had specific favorites (including of course, their daughter) singled out for a different level of privilege and an entirely revised gradient of consequence for sin. 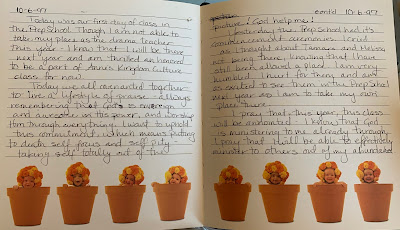 When I finally began to challenge Dannie on her abuse of power and arbitrary judgement, I was met with surprise and fear. She knew that I was a threat to her role in the community and I brought at least as much experience, intelligence and talent to all of our team undertakings as she did, if not more. Her personal vendetta toward me kept me constantly in a humiliating checkmate, and many of our peers at the time can attest to her bizarre contempt for me.

Anne Byrd focused much of her energy on the young adults in the community. She created the Banquet & Ball - which was a sort of prom substitute that allowed all of the young people (high school - marriage) to dress up and dance according to historic rituals and carefully choreographed performances. Dance lessons were required leading up to the ball, as well as etiquette classes for  both the young men and ladies.
In addition to teaching the young ladies the horrors of sex, the young men were instructed on the vulgarity of peeing while standing up and were required to use the toilet sitting down (another of Anne Byrd’s ideas). This new culture of etiquette was enforced up the age ranks throughout the community for several years before the men got sick of it. For all of the patriarchal rumors that circulate about Marble, the place was run without question by Anne Byrd. A male member of the congregation speaking up against Anne was rare, if it ever happened at all. Anne publicly and contemptuously rebuked Barry in front of the congregation on many occasions when he misspoke or she took exception with what he said.

Anne invited me to sit in on the training and the banquet and ball the first year as a sort of scribe/journalist, to take notes and pictures and write about the event. Being married and pregnant and my life all out of order, I wasn’t “qualified” to participate fully, so I sat in a corner of the Byrd’s house where the training took place and the elegant dinner was served and took notes quietly.

Eventually I was cut off from all involvement with the Prep School and I began teaching Literature and theater classes to elementary aged students at Marble, as well as taking Irish Dance lessons in Kettle Falls and teaching students at Marble Irish dance along with a couple of other girls from the community. Going through my binders of material from the teaching and investment that I put into Marble it boggles my mind. Even so, I was never regarded as a key player in Marble's destiny for dominion, something that was made very clear to me over and over again by leaders in the church.

A Visit to the Outside World

A group from Marble went down for a conference in Spokane at Harvest Christian Fellowship, a sister church that was hosting a worship event. I was enthralled with the big city church and the young couples and families who all seemed to be Godly, upright followers of Christ but also fashionable and pretty chill. I remember coming home from the conference, sitting in a vehicle next to Cheryl Melzer and talking excitedly about how nice all the people were and how fun it would be to do more things with them. Cheryl’s response was a resigned pity for their watered down version of Christianity that precluded them from the grandiose Kingdom plans that Marble was called to. This was typical of Marble’s elitist dominion mandate.

During the Prep School years, Anne held “inquests” for most of the student. It was an intensive rooting out of issues and speaking life and destiny into each individual. It was a spiritual prophesying of future kingdom roles, responsibilities and giftings. 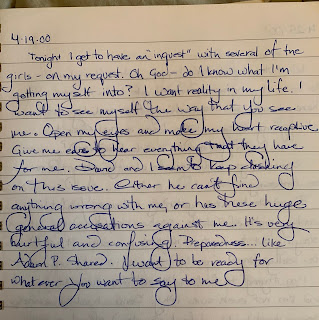 I desperately wanted an inquest of my own. I wanted to be spoken into and envisioned by leaders and my peers. My journals capture the excitement I felt when I was finally going to be allowed an inquest of my own. It's clear that I wasn't qualified to go through that process with Anne herself, but Steve and Cheryl Melzer were willing to stand in and humor my request. It was cancelled at the last minute thanks to some errand the Melzers had to run. I am grateful now that it never happened.

Speaking with former Prep School students who did receive them, they might have been one of the more severe forms of spiritual abuse that happened during that time at Marble. I narrowly escaped.

One of the most vivid dreams of my entire life was about the inquest I never had. It took place on a dark night at the Melzer’s house (as they often did), and the power was out from a violent thunderstorm outside. The oil lamps and candles around the room gave the whole thing a seance-like aura. I was sitting across from Anne with all of the prep school students around me, as well as Steven and Cheryl Melzer. Everyone was laying hands on me and praying for clear word from God on my behalf. Suddenly, Anne opened her ice-blue eyes and her face went pale. “I’m sorry,” were the first words she said. “I am sorry, but you are not one of the chosen. You don’t make it and there is nothing you can do.” 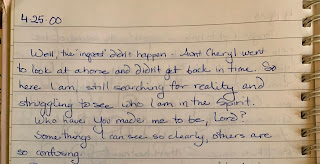 “The chosen” refers to the few that are selected by God for the kingdom on earth, based on the scripture about the wedding guests who are thrown out for wearing the wrong garments. The most terrifying thing about this dream is that it is eerily close to what many young people experienced in an inquest. At one meeting, Anne Byrd actually did tell me that I was not wearing the proper garments for the feast of the bridegroom. It was a reprimand to get my life in order at a time when I was striving with everything in me to meet all of the  unreasonable demands placed on me by Anne and Dannie, and still dealing with hell in my own marriage.

One of my very last conversations with Anne happened years later over lunch at the Mustang Grill. Lunch with Anne was a privilege reserved for either the very anointed or the very messed up, and it’s a safe bet that I was the latter. I am sure it was a last ditch effort to give me a chance to save myself on the way out.

Somehow we began talking about a girl my age who had recently defected to the real world from Marble. She had moved to the coast and was going to church (at a church loosely connected with Marble, no less), and Anne was grieving over the loss of Melissa (who was one of the select favorites) for the kingdom, and how she was throwing away her destiny.

I challenged Anne with the idea that Melissa’s destiny might lie outside of Marble, where God still lives and works. I suggested that maybe it looked totally different than Anne imagined and that perhaps Melissa would find her own way with God. Anne looked at me like I had three heads, and that was the moment that I saw her insanity for what it really is. The Byrds have always held, and as far as I know, still hold, the ideal that they have been called - or drafted - according to a sermon by Barry Byrd - to an elite ruling class that most other Christians will never attain, let alone non-believers. 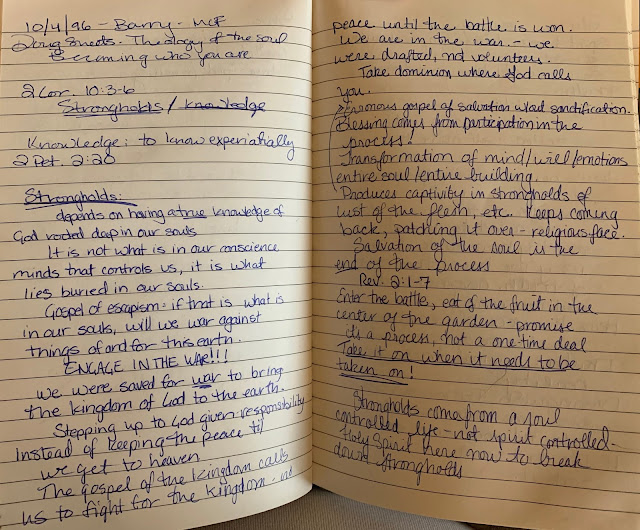