Things That Break: Desires of My Heart

Delight thyself also in the LORD; and he shall give thee the desires of thine heart.
Psalm 37:4 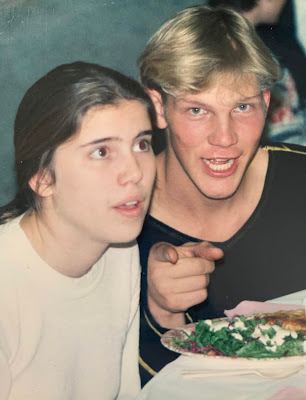 I was pregnant. Doing the math, it must have happened on or near the first time we had sex. I didn’t do the math until long after we returned home. The rest of the honeymoon was a series of nightmares. Grimace broke down in Omaha for a week and we didn't have any money left. My husband's parents and my parents took turns wiring us enough money to cover a hotel room each night as we were waiting for the repairs to be finished.

Our friend Rod loaned us the $1500 it cost to get the car running again. We checked out of the hotel every day hoping the car would be done and sat at a Denny's restaurant with no money to order food. One day we got a side of green beans because it was the cheapest thing on the menu. Another day an old man asked us what our story was, paid for our dinner and encouraged my husband to get a job with the railroad. The waitress overheard our story and the manager footed the bill for our next meal.

The car was fixed after seven days. We loaded up and went to leave only to find the freeway was closed due to a blizzard. I wept as we rolled back to the hotel and checked in again.

The next day we left and drove straight through to Cheney where the alternator (which had not been correctly installed) rattled off and the engine blew up again. I called my parents and they came and picked us up. I will never forget driving past the farmhouse where I grew up, crying silently, and wishing to God I could go back to that pink room and undo the last month.

It was almost December. We had a 16-foot camp trailer to live in. The cabin deal had fallen through. I was still miserably ill and exhausted. As we passed through Colville my mom told me that they and my in-laws had pitched in to build an apartment for us over the shop on the Glanville's property for us to live in. We had no furniture, but I cried tears of relief to have a warm roof and four walls with a flushing toilet.

I had my first appointment with the midwife (who was also a member of the community at Marble) shortly after we returned home. She said that I measured too large to be correct about the dates, and asked if I could have possibly gotten pregnant before we got married. I told her no, insinuating how ridiculous the thought was. She asked if we had had sex before we got married. I blushed and admitted we had, but that there was no way I got pregnant because we weren’t even trying. Once again, I shudder when I imagine what she must have thought of my naive perspective. She measured me again and told me when I had most likely conceived, and then she informed David and I that we had two options: either we tell the church leaders or she would.

When we sat down with Anne and Barry Byrd to tell them about our fornication, Anne looked me in the eye and told me that “what usually happens in these situations is that the young lady seduces the young man and it’s nearly impossible for him to help himself.”

Maybe I liked the sense of power that gave me. I don’t know. What I do know is that when we were told to repent to the community at a public meeting, I stood forward and took responsibility for seducing the man I was betrothed to and causing this failure. For undermining him as my spiritual authority. The leaders nodded their approval and forgiveness as my husband stood behind me at the pulpit of the church.

We were assigned to a “cell group” with leaders who were only a couple of years older than David and I. The leaders thought we’d be a good fit since Mark and Angela Black were busy cranking out babies too, and they’d never even imagine fornicating. Maybe they appeared similar to David and I based on some perception of us being into gardening and trees, etc. I guess David was, and I was into whatever my husband was, so it looked good on paper.

They weren’t particularly helpful when we would talk about issues that young married couples have, like people punching holes in the wall and other violent outbursts. I remember a lot of concerned looks, odd smiles and “hmm, let us get some counsel on that,” from them.

Truth be told I never had much respect for the Blacks because Angela was still rocking the denim jumpers that I thought Marble had freed me from. Maybe that’s why we were in their group. Maybe that’s exactly how the leaders saw me. It would be years before I would have a conversation with Anne Byrd and tell her that having babies and a garden was never on my bucket list, that I would have liked to have gone to college and traveled the world. She was absolutely shocked. I don’t know why that surprised me. I have since learned to be more vocal about who and what I am to avoid confusion like that. 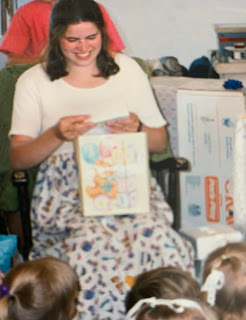 Pregnancy was hard for me. It was even harder since the man I married was so far from the one I had fantasized about. All of my friends were still doing teenage things, school, friends, jobs… the ones I left behind in Colville had moved on with no hole left where I used to be. It filled in like quicksand. Like I had never even been there.

I tried to throw a party in February of ‘96 near Valentine’s Day at our apartment. I was so lonely. I designed Walther PPK silhouette invitations for a James Bond themed movie night. I made cakes and hors d'oeuvres and found a delicious pink brocade dress straight out of the 60s that just fit over my pregnant belly. I mailed out invitations to all of my old friends. I decorated the house in pink and red hearts and James Bond girls and villains. I frosted cookies and made fancy appetizers. Not one showed up. Not one. I was alone. All of my friends at Marble were younger than me, none married, certainly none pregnant. I was no longer the barefoot-soccer playing old-movie-buff-Shakespeare-queen. I was no one.

Hallelujah Margaret was born on June 15, the day before my dad’s birthday and three days after I turned 19. I delivered at home, naturally, in our small apartment over the shop. I don’t remember much, other than the endlessness of it and then the relief of it finally being over. It was less than 24 hours before it was expected that I resume my wifely duties to the man I married. I remember that pain like it was yesterday.

I hated breastfeeding. Looking back now, I understand that some of what I was going through was symptomatic of sexual abuse and trauma. I was having panic attacks when I nursed Halle. I felt like I was going to explode out of my skin because I loathed my body so much. I despised my breasts, my bleeding and broken teenage body. I had massive stretch marks on the lower part of my abdomen that I hadn’t been able to see until after Halle was born.

The panic attacks started happening more often than just when I was nursing. My husband was the only one I had to turn to. He would hold my hand and I would try to remember how to breathe. I began to view him in some weird, holy and fearful light. I was afraid of him, and I revered him, and even though he inflicted pain on me there was never a moment that I questioned it as part of my duty to him.

I knew nothing else. I had no idea what healthy love looked like. My husband was condescending and narcissistic. Everything was my fault and I found myself perpetually repenting to him for a million petty things as he raged around our small apartment, punching and kicking holes in walls and doors when things didn’t go his way. But that wasn't even the worst of it... 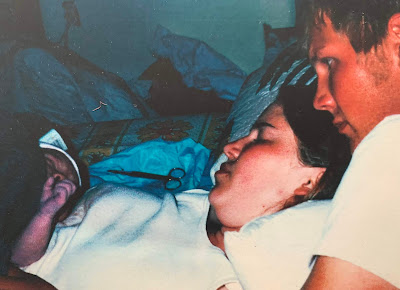