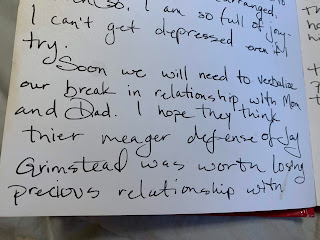 My parents, who had moved to Marble after my wedding and become fully involved in the community, decided to leave Marble in February of 1998. My mom asked in a community meeting if there was any sort of budget for the tithes, restitution and other income for the church that could be shared with the congregation. She was immediately condemned for daring to question the word of the lord (through Anne Byrd), and called out for a spirit of Jezebel that would sow seeds of mistrust in the community.

The final straw for them came when another family at Marble (which happened to be Anne Byrd's brother and his wife) dared to question Anne and Barry and were formally excommunicated. We were told we could have no communication with this family or hear their side of the story. Their confessed sins were recited by Anne and Barry for the entire congregation to cast judgement and vote for excommunication, guided carefully by leadership. We were told that Anne's brother carried a spirit of Absolom, a character from the bible who was King David's third son, a rebel who set himself against his father and was killed.

The vote was almost unanimous, with a few abstentions from families who would leave Marble shortly thereafter. Community involvement in processes like this were a way for leadership to disperse responsibility for actions taken across the congregation so that no fingers could point directly at them. The guilt of our involvement in these events is the overwhelming reason that most of us who have left Marble have not told our stories. We all live with the burden of shame for our participation. After the excommunication, my parents had had enough, and they made plans to leave.

When it became clear that my parents were making an exodus, Anne Byrd cautioned them that if they chose to “slander” Marble to the outside world that they, as leaders, would be forced to share with the community the sins that my parents had confessed to leadership. This was a reference to my father’s “confessed” lack of strong leadership and my mother’s insubordination to spiritual authority.

Shortly after this meeting, my dad was called into a meeting with some of the male leaders (my mother was not invited) and was told that he needed to get his household in order and bring his wife under submission. When leadership found little traction in this approach, my mom was counseled to “Matthew 18” my dad for his lack of leadership and apostasy of his spiritual authority over her.

My sister, who was turning19 in April of 1998, was desperate to stay in the community where she (as I) had found a network of peers were she felt that she belonged. The chronic church-hopping of our childhood and being homeschooled made us hungry to connect and belong in one place with people our own age.

Even though she was legally an adult, the strength of belief in spiritual authority that both my family and the church carried meant that she could not stay on her own independent of a male covering. This was one thing that my parents and leadership agreed on. Until she was married there was no question in my parents' minds that our father would be the only appropriate covering for her. They would not give their blessing for my sister to stay.

My sister wrote a letter of appeal to Anne and Barry, requesting to be allowed to stay at Marble. In her letter she wrote that she felt called to Marble and that she couldn't follow my father away from the church because she lacked faith in his spiritual leadership. She wrote that she feared spiritual death if she would be required to stay with my family.

The men then called a meeting and were required to vote either for or against taking ownership of my sister’s spiritual covering. My sister was planning to go into the Prep School and would be living in Steve Parker’s house and under his authority. Steve Melzer also took personal responsibility for her spiritual covering and after Prep School she would live with the Melzers until she was married.

At the meeting, her letter of appeal was shared but my parents were not given an opportunity to give their side of the story, nor even allowed to attend. Later, long after my dad requested a meeting with Barry about the issue, Barry responded with a scathing letter to my dad telling him how rebellious and insubordinate his spirit was in the request and how he couldn't think of indulging such a spirit. Having read both my father's letters to Barry and Barry's response recently, my stomach turns at the outright and oppressive bullying tactics that Barry employs in his response.

It was made clear to the men that were gathered in that meeting that my father refused to hear the Holy Spirit regarding his daughter, basing the accusations once again on my dad's confessed weakness in spiritual leadership, and every man in the meeting (except for one) voted in support of the church assuming the role of her spiritual covering against my parent’s wishes. This was another example of the Byrds systematically use of the congregation to pass down decisions which they impressed upon members as revelation from god. 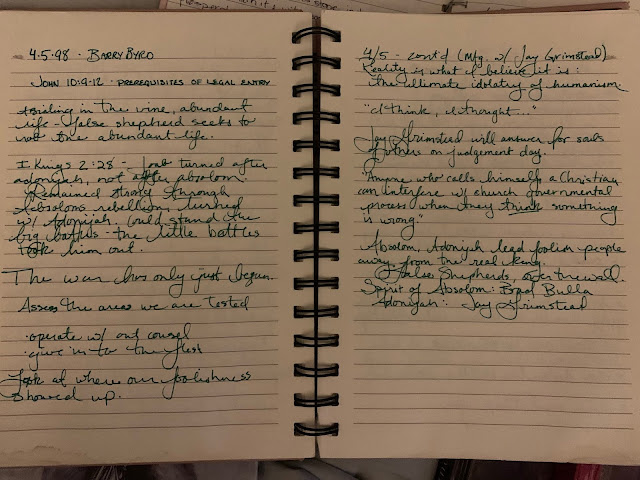 After my parents left, momentum was building among families who had also cut ties with Marble, including my father-in-law, Paul Glanville, Anne’s brother and his family and several other people who departed from the community after the excommunication. From these families, letters were written to leadership, and up the accountability line to Dennis Peacocke and the Fellowship of Christian Leaders, the authority council that Anne and Barry claimed to be submitted to, as well as several letters sent to community members, pointing out damaging leadership style if not calling Marble out as a cult.

My parents wrote a letter to Barry in defense of Jay Grimstead, a philosopher and pastor of some repute in the theological circles that we belonged to. Jay had made a public statement decrying Anne and Barry’s lack of accountability, controlling leadership style and the warning signs he saw during several months at Marble when he and his wife lived there during a sabbatical. Grimstead, along with other former members who dared to speak out, or "slander" leaders at Marble, was heralded as heretics and false prophets, according to one of Barry’s sermons. Slander became one of the hottest buzz words at Marble during this time, used liberally to refer to anything said about Marble that leadership didn't agree with.

We were warned to keep our distance from the dissenters and the spirit of rebellion that was seeking to destroy the work of the lord. At the end of 1998, it was determined that all relationships with slandering former members should be cut off. They should be “shunned” from fellowship, with the intention of using “tough love” to bring them back into covenantal relationship. For me and my sister, this meant that we needed to tell our parents that we could not longer have relationship with them until they repented for the slander and rebellious attack against Marble.

We wrote letters to them, delineating the trespasses that they had committed against us and our covenant family and casting judgement on them for their spiritual rebellion.

Until my sister married some time later. My dad could not bring himself to recognize the newly, self-appointed spiritual authority in her  life and the rift was painful. When she married her husband (who had come to the prep school from a sister church in Zillah), she was walked down the aisle by Steve Melzer. My parents were invited at the last minute through a special dispensation of grace from leadership, but they decided against coming to bear witness to the rejection of their role in her life.

The repercussions of this process on our family would last for years. My journal is filled with entries crying out about the deeply conflicting thoughts, beliefs and feelings about cutting off relationship with my parents. In one journal entry I list off several repentances I needed to make, including one to Anne Byrd for "Unholy loyalty based on uncovenantal relationships and damaged trust." I remember having several conversations with Anne and Cheryl about how wrong it felt, how dishonoring I thought I was being. The response was sympathetic but staunch. Anne had, after all, excommunicated her own brother and his family.

Excerpt from a letter to my parents, dated May 4th, 2002:
“Today is Emily’s wedding, and the place that only you can fill is painfully empty, but I believe God has a plan for all of us in this. Emily has so much to learn, and many of life’s lessons require the pain of many people. I am thankful for your willingness to endure the pain for the sake of growth.
"I confidently speak for Emily when I say that you are the best and only parents that we could have asked for, to raise us into our destiny and make us who we need to be to maximize God’s plan for our lives. We love you, and we thank God for you.” 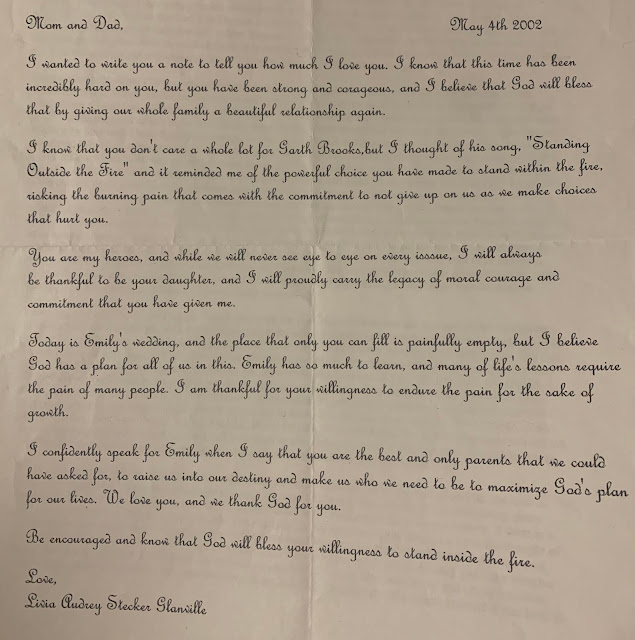